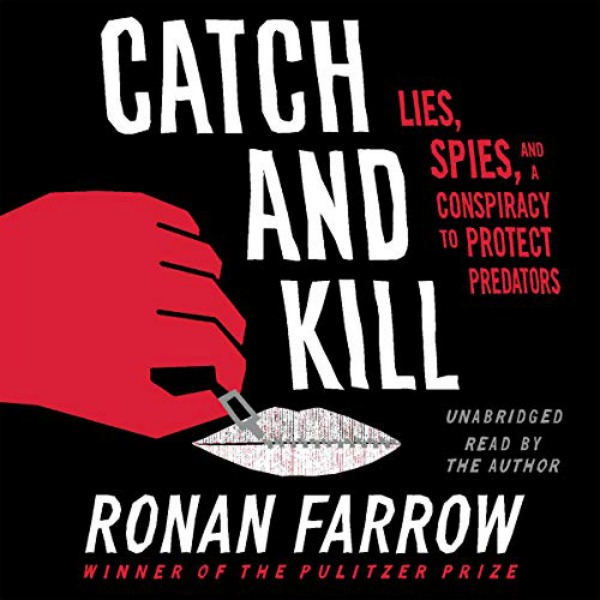 Farrow’s account of the climate of corporate-cover up that allowed for workplace predators to both survive and flourish.

“In 2017, a routine network television investigation led Ronan Farrow to a story only whispered about: one of Hollywood’s most powerful producers was a predator, protected by fear, wealth, and a conspiracy of silence. As Farrow drew closer to the truth, shadowy operatives, from high-priced lawyers to elite war-hardened spies, mounted a secret campaign of intimidation, threatening his career, following his every move, and weaponizing an account of abuse in his own family….”

For years rumors swirled around Harvey Weinstein and his predatory behavior toward women working for him. Like Jodi Kantor and Megan Twohey from the New York Times, Ronan Farrow, working for NBC, began digging deeper into those rumors, each working to put together the real story behind the rumors.

For both Farrow and the NYT reporters, getting women to go on the record was difficult. Many had signed nondisclosure agreements, others were being intimidated, and some feared speaking out would end their careers. Farrow, however, had a little more luck with getting victims to speak to him on the record. He had a video-taped interview with one woman, and a recording from another where Weinstein had admitted his attack on her. With a strong story, ready to go, time after time Farrow found himself shut down; the story postponed or found wanting by the men in power at NBC.

“You know the press is as much a part of our democracy as Congress or the Executive Branch, or the Judicial Branch. It has to keep things in check and when the powerful control the press or make the press useless, if the people can’t trust the press, the people lose and the powerful can do what they want.”

After many attempts to move his story forward, Farrow was eventually told it wasn’t going to ever go on air at NBC and that it was more of a print story. Eventually, Farrow took his story to The New Yorker, where it grew from a story about Weinstein to a more massive investigation into the corporate climate of covering for abusers. The cover-ups, particularly those by NBC, made Catch and Kill especially devastating. Farrow’s story of Weinstein, could have also been written about NBC’s own star talent, Matt Lauer. Like Miramax, NBC knew of Lauer’s patterns of abuse for years, either looking the other way or paying for silence. It was no wonder they shut down Farrow’s story. Catch and Kill does a wonderful job of pulling back the covers on the climate that for years allowed men to advance their careers while preying on the women around them. I admired that throughout, Farrow acknowledged the bravery and power of the women who finally stepped forward to say “no more.” Grade: A-

“In the end the courage of women can’t be stamped out and stories, the big ones, the true ones, can be caught but never killed.”

Narration: Farrow did a great job narrating his own book. Much of the book had to do with Farrow himself, his frustration and fears, as he got closer and closer to the heart of a story that many people never wanted to see the light of day. So, hearing it told in Farrow’s own voice made the experience more real, more powerful.