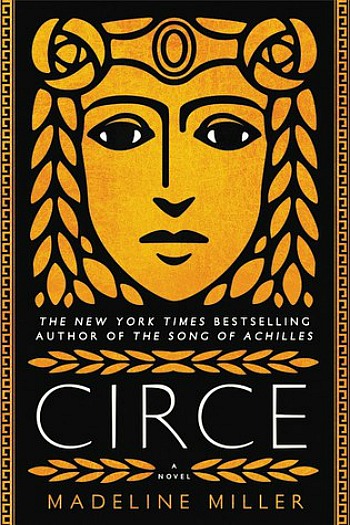 Circe, a minor Greek goddess, finally discovers her power, but crosses a line that gets her banished to a lonely, remote island where she’s to live for eternity.

“In the house of Helios, god of the sun and mightiest of the Titans, a daughter is born. But Circe is a strange child–not powerful, like her father, nor viciously alluring like her mother. Turning to the world of mortals for companionship, she discovers that she does possess power–the power of witchcraft, which can transform rivals into monsters and menace the gods themselves.”

A Classic Tale Reimagined – Taking a classic story and reinventing it with a modern twist is nothing new. We see it time after time, but the usual reimagining places the characters and plot in a contemporary setting as the story plays out. With Circe, Madeline Miller kept the characters and the setting, and instead shifted the focus, placing it solely on Circe. Those of you with a background in mythology will see many, many elements from classic Greek mythology (especially The Odyssey) popping up in this book. However, if you’ve lived under a rock and never even knew there was such a thing as mythology it won’t matter. Miller gives you everything you need to know and she does it seamlessly.

A Woman with Attitude – If you’re anything like me, you will come to adore Circe, the book and the woman. Born into one of the two most powerful families of gods, Circe adored her father, Helios, but never quite measured up. Where her siblings were gorgeous and powerful from an early age, Circe was plain and seemingly powerless. Tormented by her own family, Circe grew more and more fascinated with mortals. Falling in love with one, brought out her previously unknown powers of witchcraft.

“I was too wild to feel shame. It was true. I would not just uproot the world, but tear it, burn it, do any evil I could to keep Glaucos by my side. But what stayed most in my mind was the look on my grandmother’s face when I’d said that word, pharmaka. It was not a look I know well among the gods.”

This girl had gumption and she used her new power to punish her rival, creating a monster all came to feared. But, she paid a price for going too far. Circe was banished to the small island of Aiaia for eternity. This is where the book Circe really took off for me. On the island, I found it impossible not to admire and root for this woman who year after year, century after century, faced her fears, honed her powers, and learned to stand up for herself.

“She was gone. But I said it anyway, to that great empty room and my son’s dreaming ears: “You do not know what I can do.”

Soap Opera of the Gods – You might think a story of a woman alone on an island could get dull, but you would be wrong. Circe lived a lonely life, but was not without the occasional visitor, many bringing adventure and challenges to her life. Hermes flitted in and out with news and gossip from the worlds of gods and mortals. Her sister, Pasiphae, granted Circe temporary exile to help deal with her little Minotaur problem. Shipwrecked sailors soon discovered the wrath of Circe. And then came Odysseus, perhaps her most well known visitor, bringing to Circe a lasting love she was willing to die for. The level of drama never failed!

That House – I really can’t say any more, but for those who have read Circe: I want that house!

Absolutely EVERYTHING worked for me in Circe!

Madeline Miller is definitely a writer to admire. Reinventing the life of a minor goddess into a remarkable woman while remaining faithful to the original mythology can be no small feat. Miller did it in the best way possible, by knowing her star character and sticking to her story. From start to finish Circe was all about Circe, no long tangents, no veering off into some other god’s story. Just Circe: her life, her feelings, her mistakes, her heart, her choices. I haven’t yet read Millers’s debut, Song of Achilles, but I will. I’m already looking forward to that next trip to ancient Greece. If it’s anything like Circe, I’m sure to find the journey immersive, entertaining, exciting, everything! Just incase I haven’t been clear, I loved Circe. She will be one of my top ten books this year. Grade: A