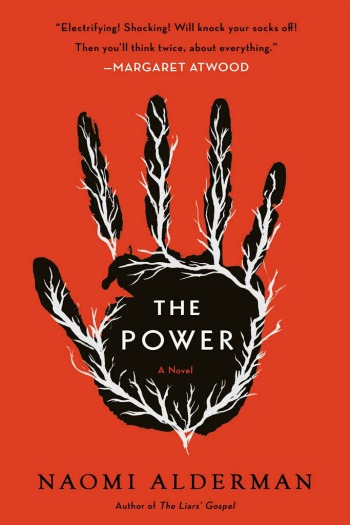 With a strange act of evolution, women finally have the upper hand when it comes to physical power, but will they learn to use it wisely or will absolute power corrupt?

“In THE POWER, the world is a recognizable place: there’s a rich Nigerian boy who lounges around the family pool; a foster kid whose religious parents hide their true nature; an ambitious American politician; a tough London girl from a tricky family. But then a vital new force takes root and flourishes, causing their lives to converge with devastating effect. Teenage girls now have immense physical power–they can cause agonizing pain and even death. And, with this small twist of nature, the world drastically resets.”

The Premise – In The Power Alderman’s premise really is everything! The book opens far, far in the future when a struggling young writer (male) is sharing his new novel with an older more experienced writer (female). He’s written a book that goes back in time giving an account of how it “might” have been when women first gained “the power.” She gently chastises him for overstepping what history has shown. His novel is The Power and from there it soars.

In Alderman’s alternate universe, teenage girls all over the world are suddenly experiencing a power from within. It’s an electrical current that courses through their bodies, can be called up at will, and that can be difficult to control. With and without intent, men have been harmed, some even killed. It’s a worldwide crisis and when the power begins to awaken in all women no one knows quite what to do, but time will show that it can’t be stopped. The power is the new reality.

Stunning Characterization – Wow! Wow! Wow! I don’t know where to begin. Naomi Alderman’s character development in The Power was absolutely brilliant. She cogently evolved four distinctly different primary characters (and several secondary ones) over the course of the first decade of this new power. Roxy, a London teen, first gets that “glittering inside” feeling locked in a cupboard as men are killing her mother. Roxy goes on to play a powerful role in the seedier side of this new world order. Margot, an ambitious American politician, first witnesses the power in her older daughter. She asks Jocelyn to show her what the power is like and in doing so her own power awakens. Margot becomes everything you’d expect a powerful politician to be.

“Nothing that either of these men says is really of any great significance because she could kill them in three moves before they stirred in their comfortably padded chairs. It doesn’t matter that she shouldn’t. That she never would. What matters is that she could if she wanted. The power to hurt is a kind of wealth.”

Nigerian grad student Tunde gets his first taste of the power from a girl who both shocks and humiliates him. When he sees it happen days later to another man, Tunde takes out his phone and films the encounter, putting the video up on YouTube. Soon he’s working with CNN, and begins traveling around the world documenting the rise of the power. Finally there’s Ali, a 15-year old foster child living in the U.S. Ali is a most unlikely candidate to become a leader, yet lead she does; first with a small group of likeminded girls, but soon her influence spreads. Ali morphs into another persona, Mother Eve, beloved by all women. Alderman kept her characters completely true to themselves, yet moved them through time in ways that were logical and real. I believed her characters.

Multiple Perspectives – The Power was primarily told from the perspectives of Roxy, Margot, Tunde, and Ali. Each played a different role in life after the power took hold and their combined experiences gave a clear overview of an evolving new world order. Alderman left me excited to begin each new chapter.

Smart Writing – Alderman wisely stuck to her story. The Power was all about people and what might happen to mankind with a shift in the power dynamic. She let her characters and their actions tell that story without philosophizing and without long-winded descriptions. Hers was a story of human nature. 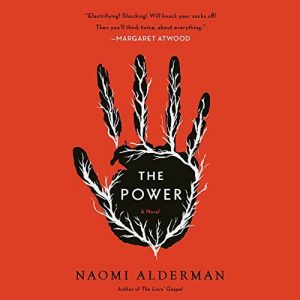 Narration – I listened to The Power on audio and the narration by Adjoa Andoh was the BEST I’ve ever heard. Her use of different voices for different characters was truly amazing. Listening to Andoh read The Power was almost like being at a movie. I could visualize everything and the characters were right there with me. (Audio Publisher: Hachette Audio, Length: 12 hrs. 5 min.) Grade: A+ (I don’t give A+ grades, but she’s THAT good!)

For Me, Nothing, For Others Violence – One of the ideas explored in The Power was that of absolute power. Does absolute power need to corrupt? In the story some women became warped with this new power. They enhanced it with drugs and took revenge when they had been wronged. There was more than one scene that was uncomfortable to read, and that may bother some readers. The tables were turned and men sometimes became the victims of sexist jokes, objectification, and even rape. I squirmed a bit, but those scenes made Alderman’s new world order ring true.

I cannot recommend The Power highly enough. Obviously, I loved it. I’ve seen reviews from others who weren’t as enamored with the book, which leads to an obvious question: “Did listening vs. reading make a difference?” Clearly, listening to The Power enhanced Alderman’s story for me, but I was also deeply enmeshed in the world she created. With or without audio, The Power is a book I’d like all women to read! Grade: A