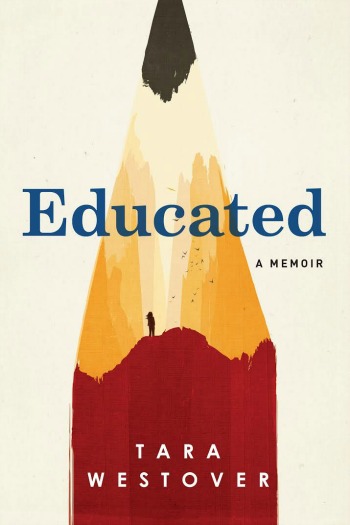 Born into a survivalist family that had no faith in modern medicine or schools, Tara Westover managed to get herself admitted to college at 17 with absolutely no formal education.

“Educated is an account of the struggle for self-invention. It is a tale of fierce family loyalty, and of the grief that comes from severing one’s closest ties. With the acute insight that distinguishes all great writers, Westover has crafted a universal coming-of-age story that gets to the heart of what an education is and what it offers: the perspective to see one’s life through new eyes, and the will to change it.”

Educated is the perfect example of truth being stranged than fiction. Had this been a novel, I think I’d have found many parts unbelievable, but knowing that Educated was the truth of Tara Westover’s life made it fascinating, horrifying, and hopeful. Together with several brothers and a sister, Westover was born into a Mormon family in rural Idaho. Her family was different than the others in her church. Yes, they attended church services and believed in its teachings, but her survivalist father added his own doctrines to their lives. He believed that schools would only corrupt his children, so Tara, as one of the younger kids, never attended school. He was rabid in his disdain for modern medicine and even in the worst of circumstances refused to consent to medical interventions. With her father’s encouragement, Tara’s mother became a mid-wife and local healer. The family stockpiled food, weapons and other supplies in preparation for the world’s end.

Tara’s father ruled with an iron fist. His beliefs were the only ones permitted. He hated anything touched by government or regulations: insurance, seat-belts, vaccines, schools, hospitals, even well known parts of history such as the Holocaust and the Civil Rights movement. Everyone in his family had a choice, they could leave or they could fall in line. Living such an isolated life, the children, including Tara tended to submit to their father’s way of life. It wasn’t a happy life, but Tara loved her parents and the mountain where she lived. She grew up working alongside her mother preserving food and making tinctures from plants and herbs. When she became a little older, Tara was conscribed to work alongside her brothers in the harsh world of her father’s junkyard. Despite the hardships, Tara manged to carve a little life for herself in a local theater group. Though it was definitely out of character for her father, he loved watching her sing and perform.

As Tara grew older, one of her brothers became physically and mentally abusive. In the close quarters in which they lived, it’s hard to believe her parents were unaware, but help was never forthcoming. Tara’s despair turned inward and her life reached a very low point.

“I began to reason with myself, to doubt whether I had spoken clearly: what had I whispered and what had I screamed? I decided that if I had asked differently, been more calm, he would have stopped. I write this until I believe it, which doesn’t take long because I want to believe it. It’s comforting to think the defect is mine, because it means it is under my power.”

Another brother left the mountain and went to college. With his encouragement, Tara began working through math curriculums, studying English and science, and eventually took the ACT, managing to get accepted to BYU at 17. It might seem like this was the break Tara needed, and in many ways it was, but family ties are strong. So ingrained was the idea that government is bad that for a long time, Tara could not bring herself to apply for a grant. Many times she nearly quit and often returned to her home, but with each class she took and person she met, Tara learned more about other ways to live a life. She began to see her parents in a different light. The accomplishment of achieving an education from BYU, Harvard, and Cambridge was striking in itself, but more so in the clarity it brought Tara about her family. The more she learned the more the Tara saw her family in light of the famous Cervantes quote:

“When life itself seems lunatic, who knows where madness lies?”

I thoroughly enjoyed Educated. Some parts were very difficult to read and others frustrating, but I always wanted to know how Tara would survive her family. Grade: B+