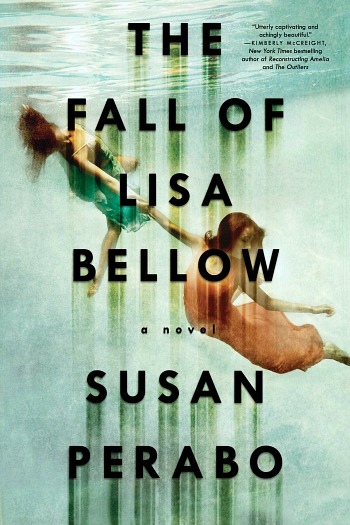 Single Sentence Summary: This is the story of the “lucky” one: the girl left behind when another is kidnapped.

Synopsis: Meredith just wanted a root beer when she stopped into the Deli Barn on her way home from school. Instead, she found herself head to head on the floor with Lisa Bellow, the most popular girl in 8th grade. In short order the robber left, taking Lisa with him, while Meredith slipped into a sort of shock she only woke up from hours later. This is the story of Meredith, the girl left behind. It’s the story of what that trauma did to Meredith, and by extension, what it did to her whole family, especially her mother.

Review: Let’s start by talking about what The Fall of Lisa Bellow is not. It’s not a mystery. It’s not a suspense story. It’s nothing like Room. It’s not about the search for Lisa Bellow or even what happened to her. What Susan Perabo’s novel is, is a tender study of a girl who experienced a huge trauma at a very vulnerable age. She closely examines how such an event might change not only the girl, but also those who love her most.

Perabo used her two central characters, Meredith and Claire, to alternately unfold the story in The Fall of Lisa Bellow. That technique is not unusual, but for her book it was ideal. I thought the author was brilliant at getting into the mindset of both characters. I teach in a middle school, and Meredith rang uncannily true to 8th grade girls. At that age so many girls are trying to spread her wings, but at the same time are afraid of being noticed or looking silly, just like Meredith. She envied the popular kids, and was exploring feelings about boys. After Lisa was taken, Meredith experienced so much guilt. Guilt for not being the one taken. Guilt for not seeing more. Guilt for not liking Lisa. Like most teens, Meredith took her fear and anxiety out on those closest to her. She could be really, really mean to her mother. Anyone who’s had a 13-year old girl knows how real that is.

“As anticipated, her parents were instantly intolerable. Before a single word was spoken, she could see that they were doing their best to appear friendly but parental, caring yet not overbearing. They were failing on nearly every count.”

Claire, a fierce lioness of a mom, was also incredibly real. When another child called her 6-year old son fat, Claire became obsessed with the pain caused to Evan. She got revenge. Unethical, but revenge none-the-less. Don’t we all secretly wish for a little revenge when our kids get hurt? Claire recalls how boring it had been to go to Little League games week after week. I agree! But, Claire was also desperate to help Meredith, who only wanted to push her away. This mother-daughter relationship was so genuine, and when Perabo thrust it into the harsh light of what didn’t happen, the intensity ramped up even more.

“What did people do with their children after they were not kidnapped? How were you supposed to help the girl not taken? There was no group for this. No best practices. Did she even need your help? Or did she just need you to leave her alone?”

I thought The Fall of Lisa Bellow was a beautifully told story about the mind of a teenage girl and family dynamics. I found Meredith harder to know than Claire and that makes sense. Mark and Evan, father and son, played supporting roles and were a little one-dimensional. The book moved at a steady pace that at times I wished was a little quicker. I’ve read of some who didn’t care for the ending of The Fall of Lisa Bellow, but I thought it was perfect. I definitely recommend this book, especially if you’re a mother! Grade: B