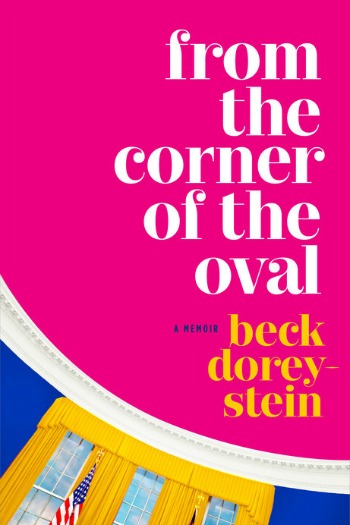 When Beck Dorey-Stein landed a job as a White House stenographer she thought it was a step down in her career, but she was wrong; it would turn out to be the job of a lifetime.

“In 2012, Beck Dorey-Stein is working five part-time jobs and just scraping by when a posting on Craigslist lands her, improbably, in the Oval Office as one of Barack Obama’s stenographers. The ultimate D.C. outsider, she joins the elite team who accompany the president wherever he goes, recorder and mic in hand. On whirlwind trips across time zones, Beck forges friendships with a dynamic group of fellow travelers—young men and women who, like her, leave their real lives behind to hop aboard Air Force One in service of the president.”

A Craigslist Job – Beck Dorey-Stein, a teacher, first came to Washington DC for a semester as a tutor at the prestigious Sidwell school. She planned to head home shortly after that ended, but as happens to many young women, Dorey-Stein met a man, fell in love, and decided to stay. Finding a fulltime job proved to be almost impossible and Dorey-Stein was about to give up when she saw a job posted on Craigslist. (Yes, Craigslist!) Its description was vague and she didn’t take it seriously. In fact, she failed to attach the required cover letter and blew off her first interview. Thanks to a second chance and her high score on a placement test, Dorey-Stein found she had a job AND it was at the White House! She was less than happy about taking a job as a stenographer, but the perks? Incredible!

A Marriage of Life with Recent History – From the Corner of the Oval covers Dorey-Stein’s life from 2011 to 2017. Because of her position, it also covers much of what was going on in the world during that time. I found it refreshing to read a memoir where the context was so fresh in my own mind. When the entire White House entourage was flying off to a summit in Europe or Asia, I liked having my own memories of that happening. Dorey-Stein did a beautiful job weaving her personal narrative into her professional journey.

“We’re so different, but we’re swimming in this same punch-drunk delirium, and we have one major thing in common: We’ve found ourselves, shockingly, amazingly, how-the-f**k-did-this-happen crazily, flying half-way around the world on Air Force One. We are lucky. We are so goddamn lucky.”

The two sides of her life were closely wed, and unsurprisingly the job dominated both sides, with mixed results.

A President to Admire – Being an Obama fan made From the Corner of the Oval an extra special treat to read. Dorey-Stein’s position as a White House stenographer was NOT attached to Obama’s administration, but her loyalty to, and admiration for the man shone throughout her memoir. It was both refreshing and a little sad to read about people who worked closely with the president on a daily basis, and to feel the level of admiration they held for the man.

“When we arrive at the Hiroshima memorial and I listen to the president’s remarks, I’m so glad POTUS is POTUS. I’m so proud he wants to make amends rather than escalate. He wants to do the right thing for future generations…..POTUS bends down and hugs a survivor of the Hiroshima bombing seventy-one years ago. I watch from the press riser, fighting back tears. The president holds on to the man in a quiet, prolonged moment. And in their embrace I witness grace after unspeakable pain.”

The appearances President Obama made in Dorey-Stein’s memoir only made my esteem grow.

The Writing – I’m so impressed with Dorey-Stein’s wonderful storytelling, for that’s what her memoir was, a story. It was sharp and compelling with just the perfect amount of detail, reading like a novel.

It ALL worked for me. Staying away from this book for any length of time proved to be nearly impossible. Occasionally, I found From the Corner of the Oval difficult to read, but only because it made me long for a different political climate than we have today.

I loved From the Corner of the Oval. It’s my favorite nonfiction read so far this year. Dorey-Stein made you feel like you were with her on an exciting 5-year journey. I found it alternately uplifting and heartbreaking sharing in her experiences with President Obama. Her admiration shone brightly and her sadness nearly overwhelmed. DO NOT miss Dorey-Stein’s “thanks” section at the end of her book. I cried. Grade: A