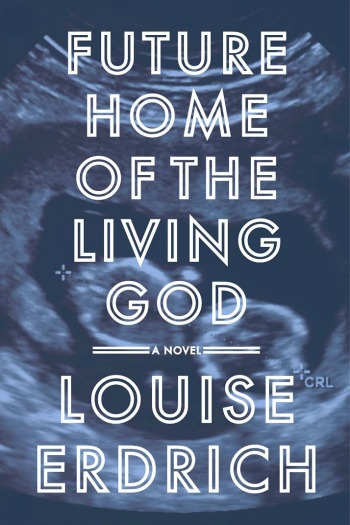 In a world where evolution seems to be rapidly working in reverse, Cedar Songmaker finds herself pregnant, scared, and wanted.

“The world as we know it is ending. Evolution has reversed itself, affecting every living creature on earth. Science cannot stop the world from running backwards, as woman after woman gives birth to infants that appear to be primitive species of humans. Twenty-six-year-old Cedar Hawk Songmaker, adopted daughter of a pair of big-hearted, open-minded Minneapolis liberals, is as disturbed and uncertain as the rest of America around her. But for Cedar, this change is profound and deeply personal. She is four months pregnant.”

Great Start – Future Home of the Living God began with the focus entirely on its main character, Cedar Songmaker and her relationships, not the evolutionary crisis happening around her. Cedar, adopted as an infant, is telling the story of her pregnancy and her life to her unborn child. She had recently been given a letter from her birth mother, a Native American woman named Mary Potts. Cedar goes to meet Mary and is welcomed by her birth family. While Cedar feels a real sense of belonging with this new family, it remains clear that she also loves her adoptive parents who would do anything for Cedar.

“But her words remind me of a teacher soothing a preschooler heartbroken over losing a stuffed animal. With a rush of gall that almost chokes me, I hate her.

The crisis is always in the background driving the story, but Future Home of the Living Gad is about people.

Cedar – I liked the way Cedar thought and her clear vision of her own story and what she valued in her changing world/ She was calm and frantic at the same time. Louise Erdrich did a wonderful job placing a real/believable character in an unreal situation.

Catholic Church – I feel like I’m always picking on the Catholic Church, but here I go again! Cedar worked for the Church and was very interested in The Incarnation of Mary. She was always drawing parallels: Cedar’s birth mother was named Mary, she’d become pregnant young, Cedar herself was pregnant. I found the many ties tiresome and largely irrelevant to the story.

Weird Side Stories – The book contained too many side stories that felt largely like filler to me. This was especially true of those having to do with “Mother.” I honestly was never clear on who or what “Mother” was supposed to be. Was she real? Imagined? Other worldly?

Men as Birds – The story included odd comparisons of men to birds. Cedar’s boyfriend, Phil, had soft wings, the driver of a recycling truck was described as “..a heron man with a big pale beak.”

Despite it’s overall strangeness, I liked many parts of Future Home of the Living God, especially its main character. The premise was unusual and I think it actually deserved more attention than Erdrich gave it. The ending came on very abruptly, leaving me with far more questions than answers. With a few more answers and fewer unnecessary side stories, Future Home of the Living God might have really worked for me. Grade: C