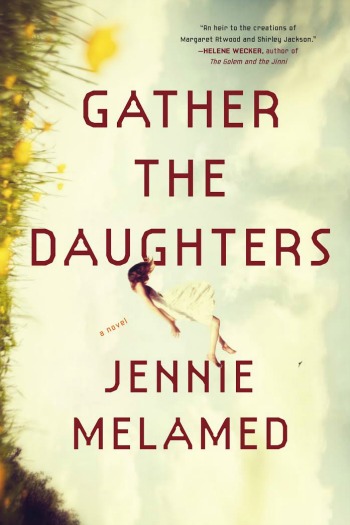 In a dystopian world, daughters of a cult finally rebel against the strict rules and controlled breeding programs laid down by the “ancestors.”

” Years ago, just before the country was incinerated to wasteland, ten men and their families colonized an island off the coast. They built a radical society of ancestor worship, controlled breeding, and the strict rationing of knowledge and history. Only the Wanderers–chosen male descendants of the original ten–are allowed to cross to the wastelands, where they scavenge for detritus among the still-smoldering fires. The daughters of these men are wives-in-training.”

A new and horrifying world – Gather the Daughters would not be the stunning book that it is without the bucolic, yet horrific society created by Jennie Melamed.

“Amanda’s summer of fruition was Mother’s first step toward death. When Amanda had children, her parents only had until the wanderers deemed Father no longer useful, and then they would drink their final draft and be buried in the fields.”

Multiple perspectives – Gather the Daughters is a character driven story told from the perspectives of four courageous young women. Fifteen-year old Amanda, married and pregnant, quietly begins to question the ways of the ancestors. Vanessa at 13 has more knowledge than most girls. As the daughter of a wanderer, Vanessa has access to books. A little knowledge can be a dangerous thing. Shy, quiet, outcast Caitlin witnesses something that goes against everything the ancestors have taught. And, 17-year old Janey? Amazing.

An emerging leader – Janey, lucky in that she has a father different than most, so wants to avoid the role prescribed to her by the ancestors that she’s been starving herself for years. Until she bleeds, there can be no summer of fruition.

“Janey is so thin that Vanessa wonders how she continues to breathe. Her body is graceful in its starvation, posed in arcs and wings of bone, her collarbone soaring upward against her skin like a loosed bird.”

At 17, Janey still enjoys the freedom of childhood summers. The younger girls look to her for comfort and guidance. Janey doesn’t set out to lead a revolt, but when fall arrives she can no longer turn a blind-eye to the lives, and deaths, of women on the island.

Honestly, everything about Gather the Daughters worked for me, but cautions are in order. The culture on the island includes incest. The word is never used, nor is the incest ever described, but it’s clearly implied and key to the story. This might bother some readers. The summer of fruition some might also find offensive, though again, it goes toward building the story.

Gather the Daughters was the perfect book for me at the perfect time. I was looking for something different and Jennie Melamed’s debut more than delivered. From start to finish, I found the book to be creative, unexpected, and original. While not a complete surprise, the ending definitely satisfied. Melamed left me wanting more and that’s a very good thing! Grade: A