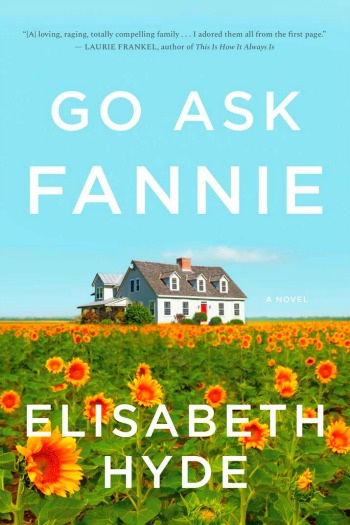 This is the story of siblings Ruth, George, and Lizzie who agree to spend the weekend at their aging father’s farm, each bringing with them their own agenda and their own painful pasts.

“When Murray Blaire invites his three grown children to his New Hampshire farm for a few days, he makes it clear he expects them to keep things pleasant. The rest of his agenda–using Ruth and George to convince their younger sister, Lizzie, to break up with her much older boyfriend–that he chooses to keep private. But Ruth and George arrive bickering, with old scores to settle. And, in a classic Blaire move, Lizzie derails everything when she turns up late, cradling a damaged family cookbook, and talking about possible criminal charges against her.”

The Past – Part of Go Ask Fannie took place in the 1980’s when the Blaire family suddenly changed from six people to four. Theirs had been a typical family in many ways: a mom who stayed at home, an attorney dad, and four children spread over ten years. What made them unusual was that Murray was running for a seat in Congress and Lillian had a secret writing life that the family knew little about. A devastating car accident took Lillian and the family’s older son, Daniel. I’d have loved for this part of the book to have been the main focus. For me it was by far the most compelling.

Concern for an Aging Father – As we all know, one child’s relationship with a parent can be very different from that of their siblings. Such was the case in Go As Fannie. Ruth loved her father, but felt like the family decision maker. She had little faith in his ability to continue caring for himself, so saw red flags everywhere. Ruth was determined to convince her siblings that it was time for Murray to move into assisted living. Lizzie, who lived closest to Murray, always felt like she was trying to prove herself to him. She worried her siblings were blaming her for not doing enough, but thought her father could mange. And George, cared deeply for his father, but always felt like “the other son.” He knew he should help more, but just couldn’t seem to manage.

Constant Bickering – I love a good dysfunctional family story. In fact that’s one of the things that drew me to Go Ask Fannie, but this dysfunction played out as over the top bickering. These “children” ranged from 48 to 38, yet they squabbled like toddlers vying for attention. They hung onto petty resentments and actively searched for ways to be slighted by each other. Even when one tried to be nice, fault was found. I found it incredible frustrating and far from authentic.

Their Mother’s Writing – All three kids expressed a great deal of curiosity about their mother’s writing. She’d never been published and they always wondered what her writing had been all about. They knew it had to be somewhere in their father’s house. And yet, for the 20+ years they’d been adults, they’d never actually looked for it. When another tragedy finally compelled them to search, they found her writing in no time. Ridiculous!

Saccharine – Yes, I found Go Ask Fannie to be overly sweet despite all the bickering. At the end it became ridiculously neat and tidy, with the story’s “villain” becoming its savior.

I found Elisabeth Hyde’s Go Ask Fannie to be a book of extremes: extremes in discontent, extremes in reconciliations, extremes in timing. For me all that added up to a less than satisfying read. Even the Fannie Farmer cookbook tie in felt forced. I’ve seen other reviews for this book that were overwhelmingly positive, but for my tastes Go Ask Fannie just didn’t work. Grade: D

If you liked books about dysfunctional families you might enjoy:

Note: I received a copy of this book from the publisher, G.P. Putnam’s Sons, (via NetGalley) in exchange for my honest review.