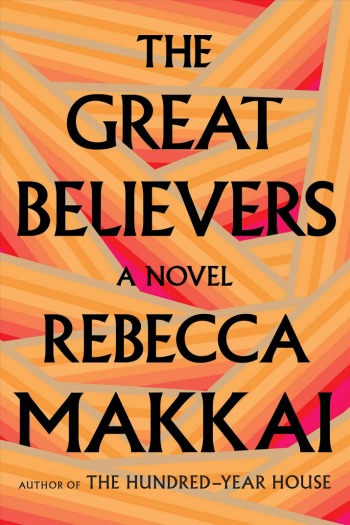 Stunning portrayal of the AIDS crisis in Chicago seen through the eyes of two people deeply affected by the epidemic that’s slowly taking everyone they love.

“In 1985, Yale Tishman, the development director for an art gallery in Chicago, is about to pull off an amazing coup, bringing in an extraordinary collection of 1920s paintings as a gift to the gallery. Yet as his career begins to flourish, the carnage of the AIDS epidemic grows around him. One by one, his friends are dying and after his friend Nico’s funeral, the virus circles closer and closer to Yale himself. Soon the only person he has left is Fiona, Nico’s little sister.”

Gorgeous Writing – Everything about Rebecca Makkai’s writing in The Great Believers stood out to me. It was poetic, sympathetic, filled with raw emotion and compassion. It was pure pleasure to read her words, even when it was through tears.

“He wanted to tell Teresa she’d taken him to the wrong place, that this withered fetus on the bed was no one he knew. But Teresa was stroking the man’s scalp, and when the man’s mouth hung open, Yale saw Charlie’s teeth. He was an alien, an Auschwitz skeleton, a baby bird fallen from its nest. Yale’s mind kept reaching for metaphors, because the simple fact of it – that this was Charlie – was too much.”

Vivid Characters – The Great Believers is a big story and Makkai populated it with a large cast of rich characters, starting with Yale and Fiona. From the very start I was drawn to Yale because he was so real, so human. As his professional life took off, his personal life crumbled in ways most of us will be lucky enough never to experience. He was an open book, easy to relate to. Fiona was a bit more of a mystery, but as her parts of the story began to unfold the reasons for her remoteness became clear. Sometimes with a book that has many secondary characters it can be easy to get them confused, but that never happened in The Great Believers. Every character had his/her own personality and quirks, letting you love some and loathe others.

“AIDS Crisis” – Those of us old enough to remember when the “AIDS crisis” rocked the world in the 1980’s, will appreciate the authenticity Makkai brought to her book. Who can forget how night after night the story dominated the news? How fear and hatred dictated too many people’s actions? How men were dying in unheard of numbers? Yale kept two lists in his head: one of potential donors for the museum he worked for and the other was the “sick list.” The Great Believers covers all this and more from inside the Chicago gay community. The historical part of this historical fiction was spot on and when reading the author’s notes at the end it was clear why.

“And how could she answer? They meant well, all of them. How could she explain that this city was a graveyard? That they were walking every day through streets where there had been a holocaust, a mass murder of neglect and antipathy, that when they stepped through a pocket of cold air, didn’t they understand that it was a ghost, it was a boy that the world had spat out?”

Intertwining Timelines – I tend to like dual timeline stories, but this one was especially well done. At first is seemed like the two stories were far, far apart, but chapter by chapter each began to reveal more about the other until they quite beautifully met up.

Long Winded Parts – There were just a couple spots in this book that got a little slow and perhaps could have been shortened. For me, these had to do with Yale’s work with Nora, an older woman set on making a large donation to the museum he worked for. They weren’t long enough to break up the flow of the book, but I was always eager to get back to Fiona and Yale.

Quite simply, I adored The Great Believers and cannot recommend it HIGHLY enough. For me it had everything: vivid characters living in a devastating era of modern history, a bit of mystery, wonderful locales, and most of all heart. This book has a lot of heart! Grade: A

Note: I received a copy of this book from Viking (via Edelweiss) in exchange for my honest review.