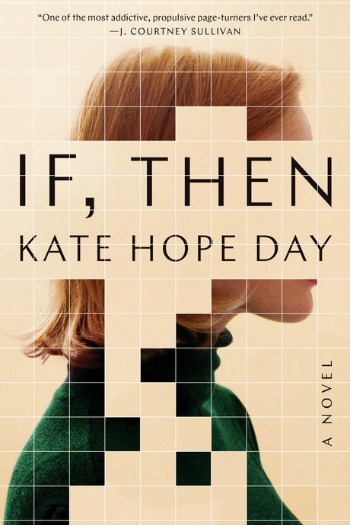 As residents of a small college town begin to experience glimpses of other realities, each assumes they’re just over worked or over tired, but secretly they believe the visions are real.

“At first the visions are relatively benign, but they grow increasingly disturbing—and, in some cases, frightening. When a natural disaster threatens Clearing, it becomes obvious that the visions were not what they first seemed and that the town will never be the same.

Startling, deeply imagined, and compulsively readable, Kate Hope Day’s debut novel is about the choices we make that shape our lives and determine our destinies—the moments that alter us so profoundly that it feels as if we’ve entered another reality.”

The Premise – We’ve all thought it: If I’d only said or done something just a little bit differently, then my life would be completely changed.

“…she was writing a dissertation on the philosophy of counterfactuals, “if….then” statements like: If I hadn’t been assigned a cubical in the science library, I would never have met Amar. Or, if I’d remembered to pack my birth control pills on our camping trip to the redwoods, Leah wouldn’t exist.”

If….then. That is the underlying premise of Kate Hope Day’s debut, so aptly titled. Neighbors in a small college town in central Oregon begin to catch glimpses of themselves and their loved ones in slightly altered realities. Mark sees a disheveled, somewhat scary version of himself lurking near his home. His wife Ginny sees herself with a different partner, but still living in the home she shares with Mark. Samara Mehta, grieving the recent loss of her mother, sees her mom out front, alive and healthy. And, new mother Cass, stuck at home quietly falling apart, finds herself rescued by a very much alive Mrs. Mehta. No one wants to talk about what they’re seeing because each chalks it up to stress, exhaustion, or sorrow. No one wants to admit that they just might be starting to fall apart. As the visions come and go, each wonders what the “if” might be to make the “then” reality.

Lots of Mystery – Besides the entire premise which constantly has you wondering, many other questions arise in If, Then. Ginny herself becomes a mystery as her real life begins to take on elements of the life in her visions. Samara uncovers secrets about her mother, which leave us all wondering.

Samara blinks. She tries to reorganize the facts in her mind. What she thought she knew about her parents, and what she knows now.”

Cass, perhaps the biggest mystery of all, has more insight than the others into what might be happening, but for much of the story she’s completely in the dark. And Mark’s visions of himself leave many questions, starting with, “Why is Mark so terrified by them?” It was a fun journey as all the questions finally came together in the end.

Dystopia Light – I like a good dystopian story, but I know it’s a genre that some struggle with. If that describes you than If, Then is a perfect book to try. Yes, there are dystopian elements, and the book leaves you thinking, but this is not the story of a cataclysmic world event that alters life on Earth. It’s about one small town and a series of events that changes the people living there. It was a perfect size dose of dystopia.

Cass & Her PhD. – In the story Cass had stopped working on her philosophy PhD. after becoming pregnant. With a daughter only a few months old and a husband on an extended research trip, Cass decides to go back to her thesis. I was fine with all this, but I felt like Day should have either taken it further, or not as much. As it was, that part of Cass’s story became a little messy and felt like it was forced into the larger context of her story. For me, Cass was really the most interesting character because of the variety of things she saw and I’d have liked to know more about that aspect of Cass. Why was her reality so different from that of her neighbors?

I thoroughly enjoyed If, Then. It was the perfect palate cleanser in the middle of my winter reading. I found it just different enough to keep me constantly engaged, but never so out-there I was rolling my eyes. The characters were well thought out and completely likeable. Best of all, I liked the reminder that everyone might have different possible versions of themselves…if only. Grade: B+

Note: I received a copy of this book from the Random House (via NetGalley) in exchange for my honest review. Thank you.