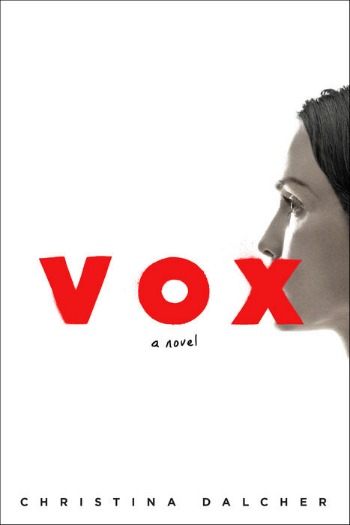 In a time not much different than our own, women have been limited to only 100 words per day, so how will they find the voice to resist?

“On the day the government decrees that women are no longer allowed more than one hundred words per day, Dr. Jean McClellan is in denial. This can’t happen here. Not in America. Not to her.
This is just the beginning…
Soon women are not permitted to hold jobs. Girls are not taught to read or write. Females no longer have a voice. Before, the average person spoke sixteen thousand words each day, but now women have only one hundred to make themselves heard.
…not the end.”

That Premise! – It might seem far-fetched that a contemporary U.S. could exist where women are essentially silenced, yet in VOX Christina Dalcher presented a plausible case for how it happened. (Let’s just leave it at the extreme religious right and a malleable president.) The silencing of women’s voices was only the beginning. Books and other print material were taken away. Girls went to their own schools where they learned home ec type skills. Women were never allowed to live on their own or work outside the home. Even mail went into a locked box that only husbands could access. Violations were punished, severely punished. While the premise may seem “out there” to some, in reading VOX it felt all too possible.

A Gripping Start – From the first 3-page chapter, I was all in and by page 21, I was terrified. It all happened so fast!

“I learned other things a year ago. I learned how difficult it is to write a letter to my congressman without a pen, or to mail a letter without a stamp. I learned how easy it is for the man at the office supply store to say, “I’m sorry ma’am. I can’t sell you that.”…I learned how quickly a cell phone account can be canceled and how efficient young enlisted men can be at installing cameras.

I learned that once a plan is in place, everything can happen overnight.”

Message to Women – Let there be no doubt about it, Christina Dalcher wants women to walk away from this book feeling a renewed vitality to get involved and stay involved. Her central character, Jean McClellan had lived an easy life. She was a highly respected researcher in her specialized linguistic field of aphasia. She led a nice life with her husband and four children. What Jean didn’t do was get involved. Her college roommate Jackie was a huge activist, and Jean wanted to be more like her, but pushing herself to get involved, to go on marches, to protest, to write letters just didn’t happen. Sound familiar? Jean realized too late that she’d given up her voice long before it was actually taken from her.

“But it is. And my fault didn’t start when I signed Morgan’s contract on Thursday. My fault started two decades ago, the first time I didn’t vote, the umpteen times I told Jackie I was too busy to go on one of her marches or make posters or call my congressman.”

Because of her specialized field, Jean had an opportunity to change that, but what about the rest of us? Long after finishing VOX, Dalcher will have you thinking about your own voice.

Genre Mash Up – VOX has something for everyone. It’s mildly dystopian, a little sci-fi, thoroughly political (the far right will hate it!), and a whole lot of thriller. For me, this was a winning combination that I couldn’t put down.

A Bit of a Stretch – I found that there were a couple of things about VOX that I just had to accept. The first was that so many men and boys had simply gone along with all the limitations placed on women. It seemed that it had all happened too easily, but I suspect that’s part of the point Dalcher was making. The science also got to be a bit much for me, so I found myself not really worrying about its plausibility and just moving on.

I would like to make VOX required reading for ALL women, especially those who don’t vote or get involved. Time and energy can be in short supply, but as we’ve already seen, complacency is dangerous. In a summer of winning debuts, VOX stands alone in its message to us all. Grade: A-

Note: I received a copy of this book from the publisher, Berkley, in exchange for my honest review. Thank you!