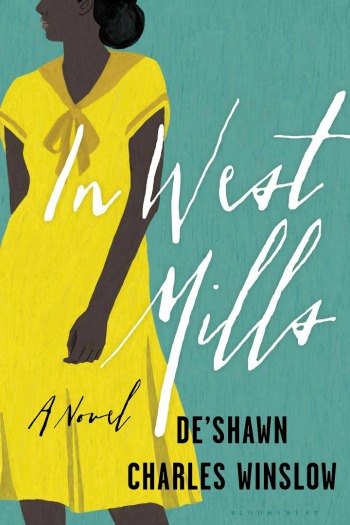 The “not so secret” secrets of a small North Carolina town keep everyone bound together for better or worse.

“Azalea “Knot” Centre is determined to live life as she pleases. Let the people of West Mills say what they will; the neighbors’ gossip won’t keep Knot from what she loves best: cheap moonshine, nineteenth-century literature, and the company of men. And yet, Knot is starting to learn that her freedom comes at a high price. Alone in her one-room shack, ostracized from her relatives and cut off from her hometown, Knot turns to her neighbor, Otis Lee Loving, in search of some semblance of family and home.”

As In West Mills begins debut author De’Shawn Charles Winslow introduces us to Azalea “Knot” Centre. She’d only lived in the community for a few years, but had quickly become well known there. Knot needed to escape the eyes of her own family, so when her father arranged a teaching job for her in West Mills, Knot left home and rarely looked back. She was liked as a teacher, but what she really became known for was hard drinking, dancing, and men. Before long Knot’s free-spirited lifestyle brought trouble in more ways than one, leaving a path of destruction, and a bevy of secrets that affected many around her.

“Knot had heard about people going into shock. But she never had been able to imagine how it might feel. This must be it, she thought to herself. When you know you hurtin’. But there ain’t no pain. When you know you sad, but you don’t feel like you gon’ cry. I want to say a whole lot of stuff, but don’t want to talk. This must be it. Got to be what shock feels like.”

While I appreciated the loyal spirit of the small West Mills community created by Winslow, the secrets and lies that percolated just under its surface grew tiresome. By the second half I especially tired of Knot. She started out as a very flawed character that you had to be rooting for and wanted to like, but over the course of her life it was difficult for me to do so. A woman who was essentially very selfish impacted so many people’s lives in oftentimes complex and hurtful ways. Knot did make some hard choices that made life better for others, but she never seemed to be able to do the same for herself. As a debut, I truly appreciated Winslow’s strong writing and insights into the people of West Mills, but I wish his story would have been more about those people and less about their secrets. Grade: C+

Note: I received a copy of this book from Ballantine Publishing (via NetGalley) in exchange for my honest review.