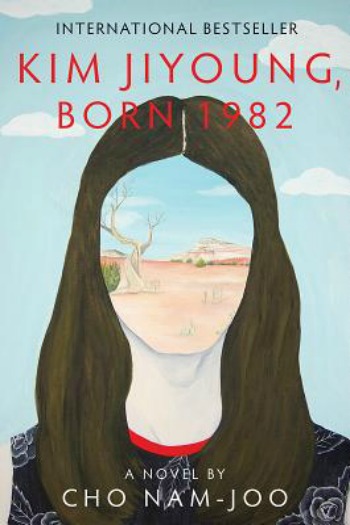 An anxious young mother looks back on her life and the culture of misogyny that brought her to a therapists couch.

“In a small, tidy apartment on the outskirts of the frenzied metropolis of Seoul lives Kim Jiyoung. A thirtysomething-year-old “millennial everywoman,” she has recently left her white-collar desk job―in order to care for her newborn daughter full-time―as so many Korean women are expected to do. But she quickly begins to exhibit strange symptoms that alarm her husband, parents, and in-laws: Jiyoung impersonates the voices of other women―alive and even dead, both known and unknown to her. As she plunges deeper into this psychosis, her discomfited husband sends her to a male psychiatrist.”

Kim Jiyoung, Born 1982 was originally published in South Korea in 2016 and made into a movie in 2019. Both the book and the movie caused controversy and helped to launch a national #MeToo like movement there. Conversations around the movie especially, were rumored to have ended many relationships there. So, just what about Cho Nam-Joo’s book could insight such passionate feelings?

In its essence Kim Jiyoung, Born 1982 is a history of patriarchy in South Korea. The title character, Kim Jiyoung experiences a sort of breakdown after leaving her career to care for her first child. This sends her to the couch of a psychologist, where she shares the story of her life and to a lesser degree, her mother’s.

Time and again, Kim Jiyoung came second to the men in her life, including her younger brother, friends, classmates, co-workers, and her own husband. Her life story is a history of rampant patriarchy within South Korea. But, as women in South Korea (and many other countries) could tell you, Kim Jiyoung’s story is really most every woman’s story.

“But that night, Jiyoung got an earful from her father. ‘Why is your cram school so far away? Why do you talk to strangers? Why is your skirt so short.’ Jiyoung grew up being told to be cautious, to dress conservatively, to be ‘ladylike’. That it’s your job to avoid dangerous places, times of day and people. It’s your fault for not noticing and not avoiding.”

I loved the way Nam-Joo chose to deliver Kim Jiyoung’s story, not just with what happened in her life, but also with actual documentation and statistics around gender inequality in her country. Within the work, are actual citations, showing the reader Kim Jiyoung’s experiences were the norm. These references also highlighted the very slow process of change and even legislation toward bringing greater equality to the women of South Korea. All evidence pointed toward Kim Jiyoung finding equilibrium in an evolving nation, but evidence doesn’t always lead to the expected conclusion! I really enjoyed this short, fact-filled book. I feel like I know a lot more about South Korean culture, and a lot more about how we’re all alike. Grade: B+

Note: I received a copy of this book from the Liveright (via NetGalley) in exchange for my honest review.