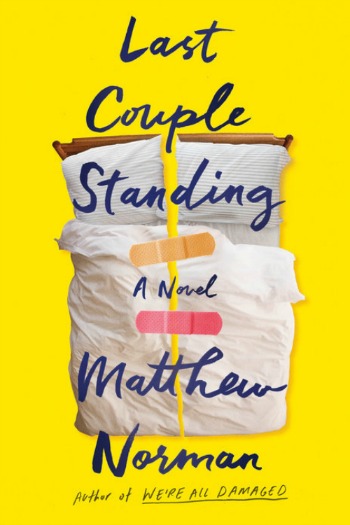 Funny story of a couple, surrounded by divorced friends, who devise an unconventional plan to save their own marriage.

Last Couple Standing tell the story of Jessica and Mitch Butler, who met each other and their inner circle of friends while attending Johns Hopkins. After graduation, one-by-one, couples married, moved to the suburbs and began having kids. As their 40’s approached, they also started getting divorced until Jessica and Mitch were the only couple left standing. Both saddened and a little panicked, Jessica came to Mitch with a plan to save their marriage by adding some excitement in the form of one night stands. (This happens early, so it’s not a spoiler.) They set up some very serious, but incredibly funny “rules” for engagement. Matthew Norman took a humorous approach to his entire story which makes it perfect for right now.

“What they were agreeing to were dalliances: little breaks from their daily reality. Anything more than once would be an affair, and affairs were the hideous cliches of middle age. Affairs were ugly and required lies and guilt, and they ruined lives.”

I divorced around 40, as did two close friends. We all jumped into the world of dating apps, so I can attest to the accuracy of Norman’s hilarious take on what you get when you first go that route! That and many other parts had me laughing-out-loud. I particularly loved a bit that ran through the book on E.T. Mitch had made the mistake of showing the movie to his 9 and 7-year old children and they’d been terrified of their closets ever since, making his and Jessica’s nights a nightmare.

Norman’s cast of supporting characters was strong, from the two kids, to Mitch’s high school students, to Jessica’s clients, to their rather pathetic group fo friends. I truly enjoyed my time with Last Couple Standing. It made for fabulous, easy reading and would be outstanding as a mini-series. I read this one, but can guarantee that it would be great on audio. (I almost wish I’d listened to it.) No matter the format, get in line now for Last Couple Standing! Grade:  A-

“Sure, the metal box in which he kept the image of her with another guy had sprung open a few times this week and melted his face off, like the last ark in the first Indiana Jones movie. But honestly, isn’t that adulthood in a summary? Constant feelings of pure, overwhelming dread?”