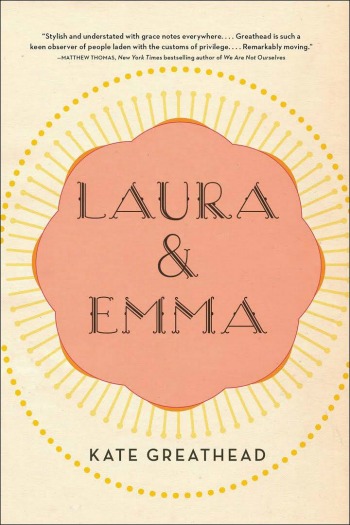 It’s 1981 when quirky, single Laura finds herself unexpectedly pregnant, and with indomitable spirit brings Emma into her world.

“Told in vignettes that mine the profound from the mundane, with meditations on everything from sex and death to insomnia and the catharsis of crying on the subway, a textured portrait emerges of a woman struggling to understand herself, her daughter, and the changing landscape of New York City in the eighties and nineties.”

Laura – Despite its title Laura & Emma is really Laura’s story and of that I’m very glad. Her quirky personality reminded me very much of Eleanor in Eleanor Oliphant is Completely Fine, and like Eleanor, she could be a hoot. Laura was not your typical wealthy New Yorker. She cared little for the luxuries that money could buy and tended to wear the same “uniform” outfit most days. Laura certainly cared little what others thought (including her family), and tended to be a loner. She had no desire for a marriage, a partner, or even for sex. Laura marched to her own drummer, but willingly suffered long boring summer vacations because she knew they were good for her daughter, Emma. Even the way Emma was conceived spoke to just how weird Laura could be, but her love for Emma drove this story.

I Want To Be Rich! – Laura lived her own life and made her own decisions, but her parents’ money was never far away. Thanks to trusts and parental help, Laura’s life was made pretty easy. Sure, she had to buy a large penthouse apartment on the edge of a not so great part of the city, but it was hers. When Laura couldn’t quite find the right nanny for Emma, her work hours (at a family firm) were quickly adjusted, but conveniently, her pay remained the same. Summers off? No problem. Tuition to private schools? Enter her father. Money was part of who Laura was and I liked that Greathead didn’t shy away from it. She gave Laura plenty of advantages, which were just a part of who she was.

Mothers & Daughters – Laura finds herself in the center of two great mother-daughter relationships. Her own east side mother, Bibs, was a kick, often frustrating Laura. Yet, Laura loved her deeply. Bibs was none too happy when Laura turned up pregnant, but in her own way was a great support and a loving grandmother. Emma, for Laura, was what many daughters are: payback. She was a pistol with strong opinions from a young age and she wasn’t afraid to share them. She brought meaning and messiness to Laura’s tidy life.

“The little space between her nose and upper lip dimpled in anticipatory excitement; she fixed her eyes on Laura’s and followed them like liquid magnets. Laura’s love felt like a bird in her chest, beating its wings against her rib cage.”

An Abrupt Ending – Late in Laura & Emma there was a shift to a more mature relationship between the two characters. While this was not unexpected, it somehow felt forced, almost random. This part of the book just didn’t work as well as the rest largely because it felt so abrupt. The story was rolling along nicely and then it was over.

I consider Laura & Emma a very successful debut effort by Kate Greathead. Both her writing and character development were strong, plus her book had a lot of humor that kept it light. I’d have liked to see a little more resolution to the story’s ending, but I was happy to be reading and completely engaged throughout. I especially liked the way Greathead told Laura’s story in chapters moving through the years from 1980-1995. That’s a fun era and a quirky, moneyed heroine in NYC made it even more fun. Grade: B

Note: I received a copy of this book from the publisher in exchange for my honest review.