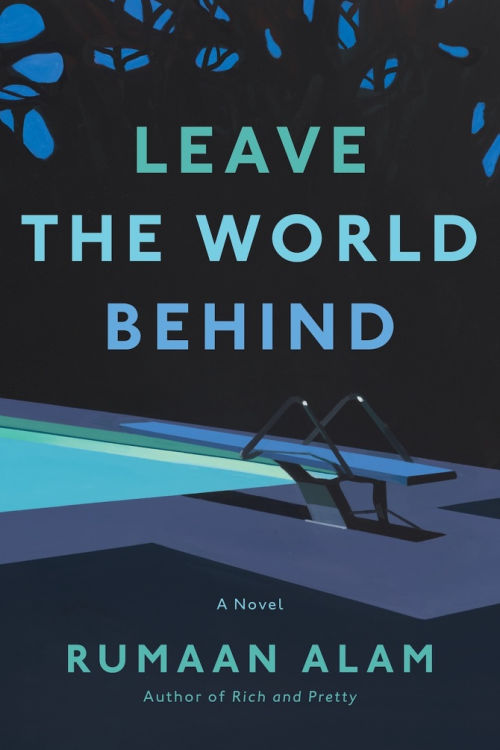 Something bizarre is happening out there, forcing two very different couples to face their fears and themselves.

“Amanda and Clay head out to a remote corner of Long Island expecting a vacation: a quiet reprieve from life in New York City, quality time with their teenage son and daughter, and a taste of the good life in the luxurious home they’ve rented for the week. But a late-night knock on the door breaks the spell. Ruth and G. H. are an older couple—it’s their house, and they’ve arrived in a panic. They bring the news that a sudden blackout has swept the city. But in this rural area—with the TV and internet now down, and no cell phone service—it’s hard to know what to believe…”

I’ve seen a lot of chatter about Leave the World Behind, Rumaan Alam’s third book, and I’m here to say I LOVED it! It’s not an easy book to describe because throughout it not even the characters are quite sure what’s happening, but something is off. Clay and Amanda and their two teens have rented a lovely, remote country home for the week. Late on their second night there, a knock at the door brings an older Black couple they’ve never met before. G.H and Rose, the owners of the home. They’ve arrived claiming “something” happened in NYC causing a total blackout. The couple is clearly shaken and eventually Clay and Amanda agree to let them stay the night. Things get stranger as cell service, internet and cable are all out.

Tension abounds in Leave the World Behind not only because no one knows what is really going on, but being in close quarters under trying circumstances forces the characters to look at themselves more closely. Issues of race, class, and traditional roles intersect with bizarre events and growing uncertainty. This book is hard to classify. It’s a little bit dystopian, a little bit mystery, and a lot social commentary, but in a completely unique way. I really liked all the characters, the ways they interacted with each other, and faced down their own flaws. This won’t be a book for everyone. The ending is not neat and tidy, but I loved how humanity shown in Leave the World Behind as the two couples were forced to not only work together, but to really SEE each other. Grade: A

Note: I received a copies of this book from Ecco in print and electronically (via NetGalley) in exchange for my honest review.