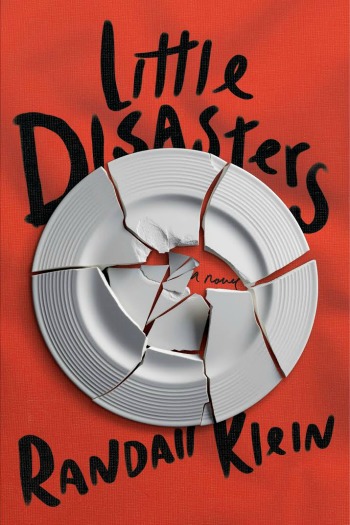 The story of Michael and Paul whose tangled relationship begins with the birth of their sons, and ends in disaster a year later.

“It was the exhilaration of new parenthood that first united Michael and Paul, outside the Brooklyn hospital where their wives, Rebecca and Jenny, had exiled them from the delivery room. For Paul, though, tragedy swiftly followed that euphoria. Hoping to speed his and Jenny’s recovery, he turns to Michael for a favor, unwittingly kindling the spark of connection between these couples into the affair that will blow them apart.”

A Story Meeting in the Middle – Randall Klein’s debut novel tells the story of two men who first meet while their wives are in labor at the same hospital. Soon, the two families’ lives are hopelessly entangled and a year has passed. Michael is now deep into an affair with Paul’s wife, Jenny. The two are set to have a romantic rendezvous at the Cloisters, only something goes terribly wrong in midtown Manhattan, stopping all forms of travel. Klein alternately shares the individual journeys Michael and Paul take on that long, hot August day with the events of the last year that brought Jenny and Michael together. These alternating narratives came together very nicely.

Grief Done Right – You will find very early on in Little Disasters that Paul and Jenny have lost their baby and that Randall Klein in no way shies away from his characters’ grief. The raw emotion felt by both Jenny and Paul was so authentically delivered that it seemed to me the author must have experienced it himself.

“I take a step toward her and she backs away, but I follow through, gathering her into my arms, letting her weep into the spot she just punched. “If you want to move, we can move. We can move anywhere you want.”

This only makes her cry harder. She doesn’t want to leave Greenpoint, or this home on Franklin Street. It took us so long to find it, longer to afford it. So, instead she goes limp in my arms, lowering herself to the floor, taking me with her, until I have her cradled on the kitchen floor, both of us in tears, the oven growing cold.”

As heartbreaking as Jenny’s loss was, Paul’s grief almost felt more devastating. He had to constantly temper his own feelings so as not to further upset Jenny.

A Crisis That Wasn’t – A major element in Little Disasters was that some “event” had happened in midtown Manhattan during the morning commute time, shutting down almost all transportation. While I can buy this sort of disaster happening, what I found almost impossible to buy was the complete lack of media coverage surrounding this catastrophe. The public had no idea what had happened. No televised reports. No radio coverage. No smart phone or internet information. Nothing. Just the promise of a news conference at 6 p.m. (Somehow that bit of information was widely known.) This was ridiculous. We all know how fast news gets out there and especially in a crisis. I just could not buy Klein’s reasons for why normal channels were ALL failing.

Slow – By the middle of the book it was dragging for me. I didn’t really care about either of the men. Too often, just as I thought one of their stories was about to get interesting, it didn’t.

The “Dates” – A whole section of Little Disasters featured the museum dates Michael and Jenny went on as their affair blossomed. Yawn! I just didn’t care! There was a lot of skimming going on during their dates. To be honest, I wasn’t ever able to connect with Jenny and by the end I actively disliked her. It was hard to fathom why two men were willing to sacrifice so much for this not very nice woman.

It’s not important for me to like characters in order for me to enjoy a book, but it helps. Unfortunately, Little Disasters was a book where I not only didn’t care much for any of the characters, but I also found the story itself to be so unlikely as to be unbelievable. I did like the ending, though it was not enough to save Little Disasters for me. Grade: C+

Note: I received a copy of this book from Viking (via Edelweiss) in exchange for my honest review.