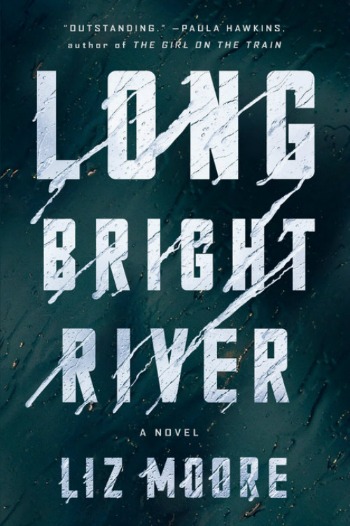 Two sisters grow up in the same sad house, but ended up in very different places: one a cop, the other a drug-addict living on the streets.

“Then Kacey disappears, suddenly, at the same time that a mysterious string of murders begins in Mickey’s district, and Mickey becomes dangerously obsessed with finding the culprit–and her sister–before it’s too late.

Alternating its present-day mystery with the story of the sisters’ childhood and adolescence, Long Bright River is at once heart-pounding and heart-wrenching: a gripping suspense novel that is also a moving story of sisters, addiction, and the formidable ties that persist between place, family, and fate.”

I don’t normally go for books that are even the least bit of a police procedural, and the narrator of Long Bright River is a cop, so I had concerns going into this one. However, I’d also heard it described as more of a literary mystery and that intrigued me. I gave it a shot, and am I glad I did! I flew through this book that in the end felt much shorter than its hefty 480 pages.

Moore used dual timelines to tell the stories of Philadelphia sisters Mickey and Kacey, close as children, drifting apart as teens, and estranged as adults. The two grew up in their grandmother’s home after drugs took their mother and their father drifted away. When Kacey started using, Mickey tried over and over to help her, even as she realized you can’t truly help someone who doesn’t want it. Mickey, a quiet loner to begin with, grew more and more isolated over the years. Her choice to become a cop seemed out of character, but it also gave her the opportunity to keep an eye out for Kacey who by that time was living on the streets.

“In a moment of clarity, Kacey, once told me that time spent in addiction feels looped. Each morning brings with it the possibility of change, each evening the shame of failure. The only task becomes the seeking of the fix. Each dose is a parabola, low-high-low; and every day a series of these waves…”

Add to this mix, unplanned pregnancies, a 4-year old boy, a lifetime of resentments, a series of local murders, a corrupt police department, Kacey’s disappearance, and Mickey’s determination to find her and you have the heart of Long Bright River. I appreciated that the path toward the story’s resolution took more than one twist that I didn’t see coming. I especially liked Moore’s ending, which didn’t resolve everything, but instead left you with questions. Even more I liked that, Long Bright River made me want to read nonfiction about the drug crisis in America, a topic that (up until now) I’ve worked to avoid. That’s what a great story can do for you! Grade: A-