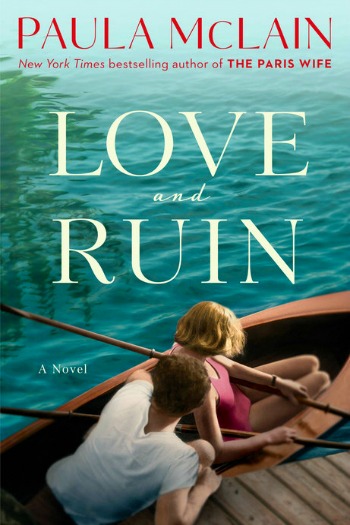 Martha Gellhorn and Ernest Hemingway, both writers, both journalists, sharing the same dreams, competing with one and other even as they fell in love.

“In 1937, twenty-eight-year-old Martha Gellhorn travels alone to Madrid to report on the atrocities of the Spanish Civil War and becomes drawn to the stories of ordinary people caught in the devastating conflict. It’s the adventure she’s been looking for and her chance to prove herself a worthy journalist in a field dominated by men. But she also finds herself unexpectedly—and uncontrollably—falling in love with Hemingway, a man on his way to becoming a legend.”

Martha Gellhorn – Prior to reading this book, I knew little more about Martha Gellhorn than her name and connection to Hemingway. What a delight to get to know this amazing writer/journalist while reading Love and Ruin. Told in first person, it quickly became obvious that Martha Gellhorn was a powerhouse in her own right. Before she’d ever met Hemingway, Martha had published two books and traveled the world on her own. Writing and reporting were her passions and throughout this story, McLain made that clear. I appreciated that Gellhorn was willing to take some advice and even some help from Hemingway, but that she always followed her own instincts. Gellhorn’s relationship with Hemingway and her career as a war correspondent both began in Spain at the time of the Spanish Civil War, but with or without Hemingway, she carried on reporting from war zones.

Life of Writers – The contrast between the writing lives of Hemingway and Gellhorn was fascinating. During the years of Love and Ruin, both had periods where their writing was stalled. McLain made you feel the frustration of living with another writer who was writing like crazy and, for Martha, she also dove into the pain of failure.

“I piled the pages up and rested my head on them for a moment, saying whatever prayer it is writers have for the gifts that come from somewhere both inside and outside. And then I walked through the dark house to the pool and shed my clothes at the edge and slipped through the cool skin of the surface, plunging down and kicking hard, my mouth trailing bubbles. This too was a prayer.”

The balance of power between Gellhorn and Hemingway never quite tipped in Martha’s favor, but she, more than Hemingway, never lost sight of what was truly the essence of who she was, a writer. It was impossible not to admire the lengths Gellhorn would go to get a story. Despite being a woman she eagerly covered wars in the 30’s and 40’s.

History Lesson – I’ve read many, many books on WWII, but Love and Ruin covered parts I knew very little about. It was especially interesting to read about how journalists covered wars during that era. Like now, they were able to get remarkably close to the fighting, reporting on it and the human-interest stories created by war. I had never even heard of the Winter War that took place during 1939-1940 as Russia repeatedly bombed Finland and the Finish bravely fought back. Martha covered this war while Hemingway stayed at their home in Cuba.

That Writing – As in her other recent books, Paula McLain takes a woman, finds out everything she can about that woman, and then creates a character that is so full of life the reader feels like she’s a friend or a relative. She stays with the story and can beautifully turn a phrase. I highlighted dozens of passages, all gorgeous and rich in meaning.

“I didn’t want to cause trouble; I only knew what I knew. That Ernest could eclipse me, large as any sun, without even trying. That he was too famous, too far along in his career, too sure of what he wanted. He was also too married, too dug into the life he’d built in Key West. Too driven, too dazzling.

Hemingway – There were very brief chapters told from Hemingway’s perspective and while they didn’t bother me, I thought they were unnecessary.

Occasionally Slow – Just that. Every once in awhile, Martha’s story bogged down just a bit with the history. I found this mainly true during the Winter War.

Love and Ruin is a beautifully told story of a strong, independent woman. Years ahead of her time, Martha Gellhorn tried to balance career with marriage. Being married to a famous, powerful man she was in direct competition with made her journey even more difficult. Like today, balance isn’t always possible. Ernest wanted a wife. Martha wanted a career. This is her story! I already trusted Paula McLain, but with Love and Ruin I’m even more devoted. Grade: A-