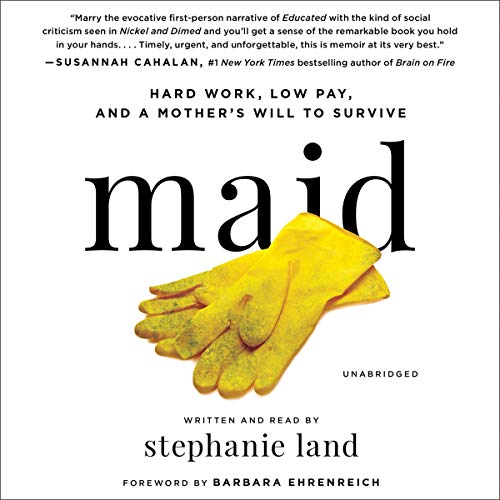 An honest, powerful telling of one young mother’s journey to escape poverty, Maid will leave you with much to think about.

“At 28, Stephanie Land’s plans of breaking free from the roots of her hometown in the Pacific Northwest to chase her dreams of attending a university and becoming a writer were cut short when a summer fling turned into an unexpected pregnancy. She turned to housekeeping to make ends meet, and with a tenacious grip on her dream to provide her daughter the very best life possible, Stephanie worked days and took classes online to earn a college degree, and began to write relentlessly…”

Honest Delivery – Stephanie Land’s story of pulling herself up out of poverty is not what you might first imagine. When Stephanie got pregnant she was not a young girl, but a woman of 28. She hadn’t yet done much with her life, but had plans and was getting by. With a child to support and care for, Stephanie slipped into poverty. She shared her painful, sometimes embarrassing journey with integrity. She didn’t always look good in her own story. Like the rest of us, Stephanie had shortcomings; she sometimes made bad choices or missed opportunities to improve her situation. Land spoke of her own family and the many problems they had with the same honesty. She didn’t shy away from crediting the people in her life who helped along the way nor showing her frustration toward those who couldn’t or didn’t.

The Pain of Needing Help – When Stephanie’s daughter, Mia, was less than a year old circumstances rendered them homeless. She had no choice but to turn to government assisted housing that also included apartments for people being paroled out of prison. She lived with a curfew, a ban on alcohol and random drug tests. Once Stephanie left that housing, she vowed to never be homeless again.

“The trauma from the last six months since we’d been homeless and dealing with Jamie always fighting with me had paralyzed my whole system, my brain, stomach, nerves. Everything was on constant high alert. Nothing was safe. Nothing was permanent. Everyday I walked on a rug that could be yanked out from under me at any moment.”

She kept that vow, but it meant years of living on the edge, working painful, backbreaking jobs, constantly counting pennies, never having enough, always being one step away from disaster. She lived constantly aware that getting sick for a few days or a car accident could sink her right back into homelessness. Stephanie’s commitment to Mia and her dream of finishing her own education and becoming a writer worked together to keep her going despite all hardships.

A Book to Make you Think – A big part of Maid was Stephanie talking about her work as a house cleaner. She shared some of the horrors of that job, how little she really made, how physically painful the job was, and how clients treated her. To some she was completely invisible, a ghost in their homes. To others, she became someone they cared about, but either way, she was there to take care of all they didn’t want to do themselves. I have a woman who cleans my house every couple weeks and a man who cares for my yard. I kept thinking about how they might see me. Do I treat them like a ghost? I don’t think so, but could I do a better job of getting to know who they really are? Yes. Could I find better ways to say thank you? Yes.

Narration – I always worry when an author narrates his or her own book. So often it can sound grating or amateurish, but that was not the case with Land. She did a wonderful job, with great inflection and pacing that was just right.

Repetitive – There were a few times in the second half of the book where I felt like Stephanie got a little repetitious in her anecdotes. It didn’t happen often, so was easily overlooked.

I liked this memoir very much! I don’t think Land was trying to make any kind of social statement with Maid, but it happened anyway. She made me think, but didn’t hit me over the head with it, and I so appreciate that. I liked her determination to not only survive, but to make a better life for Mia, to find a way to get an education, and to build the life she dreamed of. The end left me in tears.
Grade: A-
Narration: B+