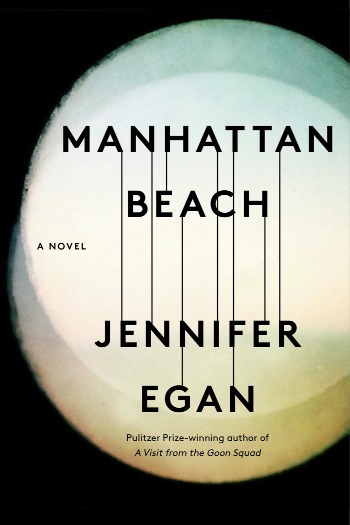 In the midst of WWII, Anna Kerrigan crosses paths with Dexter Styles, bringing back far-off memories of a meeting between her long-vanished father and Styles.

“With the atmosphere of a noir thriller, Egan’s first historical novel follows Anna and Styles into a world populated by gangsters, sailors, divers, bankers, and union men. Manhattan Beach is a deft, dazzling, propulsive exploration of a transformative moment in the lives and identities of women and men, of America and the world. “

Old Movie Quality – Many times when I was reading Manhattan Beach I felt a sort of old noir movie vibe going on. I pictured the whole story in black and white, especially the nightclubs and bars, filled with the beautiful people and run by gangsters. The era, spanning the depression to the end of WWII, lent itself to the old-fashioned feel, with Egan’s beautiful writing adding another rich layer.

A Girl with Gumption – For the most part I liked Anna Kerrigan, the young woman at the heart of Egan’s story. Her family had been dealt some hard blows including a vanished father, and Anna did everything she could to make life better for her mother and crippled younger sister. Anna’s desire to become a diver felt real and her course to achieve that goal was one of the parts of this book that I liked best. Everything about Anna’s quest to become a diver was interesting.

Themes of Change and Redemption – Both Dexter Styles and Eddie Kerrigan came to be on quests for redemption. Both had made decisions in their lives that they’d begun to regret, but neither found change an easy path to walk.

“…Dexter felt the protesting part of himself – angry, eager to be done – slide abruptly away. He settled into the project of providing this accursed creature an experience of the sea. He absorbed the importance of it, the singleness of the task. It was a relief.”

Like Dexter and her father, Anna also sought to make-over her life.

A Slow, Slow Pace – I’m so sorry to say it, but for me Manhattan Beach was just plain slow. I almost quit at about 67%, instead I rallied and kept going. Throughout the book there were times when it felt like the pace was about to pick up, but then? It didn’t.

Under-developed Characters – I never felt like I really knew or understood any of the three primary characters, making some of their actions almost incomprehensible. Egan spent a lot of time on side characters who seemed to pop in and out of the story when the plot needed to move. A tighter focus on the primary characters might have saved Manhattan Beach for me.

Vanishing Character – Eddie was missing for much of the book and then suddenly took over. Why? His story dominated the second half and was filled with characters who meant nothing to everything else that had been happening.

Implausible Actions – Had I known the characters better some of the choices they made might have been a little more believable for me. As it was, the book required me to suspend disbelief too many times to really enjoy the story.

Rarely do I write such a negative review, but I did finish Manhattan Beach and my commitment is to reviewing books I finish. I admit, I probably should have quit on this book, but just never could quite believe it wasn’t going to turn the corner into brilliance. For me it didn’t, but Booklist, Kirkus, Library Journal, and Publisher’s Weekly can’t all be wrong. I look forward to hearing what others think of Jennifer Egan’s latest. Grade: C-