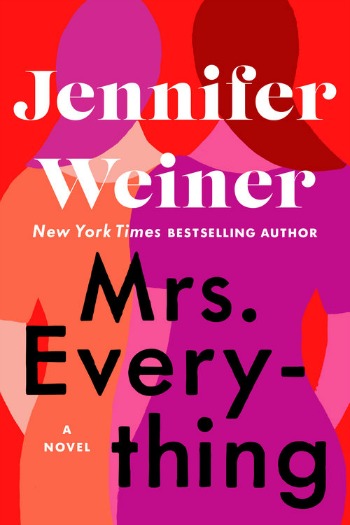 For more than 60 years, sisters Jo and Bethie grow and adjust, trying not to lose themselves as they strive to keep pace with the ever-changing world.

“Growing up in 1950s Detroit, they live in a perfect “Dick and Jane” house, where their roles in the family are clearly defined. Jo is the tomboy, the bookish rebel with a passion to make the world more fair; Bethie is the pretty, feminine good girl, a would-be star who enjoys the power her beauty confers and dreams of a traditional life.

I read a few of Jennifer Weiner’s early books way back in the early 2000’s, but hadn’t read her in many years. I felt like her books had moved more toward chick lit/romance type stories which just aren’t my thing. Then, last winter I started seeing blurbs for her upcoming book, Mrs. Everything, and there was something about it that piqued my interest. It seemed like her latest offering might have a little more of the heft and substance I look for in a book, especially one of nearly 500 pages. I’m happy to report that my instincts were correct

Mrs. Everything tells the story of sisters, Jo and Bethie, from their early childhood in the 50’s right up until 2016. For more than 60 years the reader has the pleasure of not only knowing these two very different women, but also seeing how they evolve and adapt to the rapidly changing world in which they live. Just think of all the ways the world has changed in the last 60 years…Dr. King’s “I Have A Dream” speech, Vietnam and the protests against it, the free-love counter-culture movement, a man landing on the moon, the ongoing fights for civil rights, women’s rights and gay rights, huge leaps in technology, political ups and downs. Jo and Bethie lived through all that!

Of the two, Jo was the athlete and the student, but also the daughter who most frustrated her mother. Bethie was the sweet girl, the popular girl, clearly her mother’s favorite. But, as they grew older, these sisters’ paths diverged from what we’d come to expect. The pressures of independence, responsibility, love, heartache, marriage, abuse, careers, and children all molded Jo and Bethie into women I both liked and admired.

I thought the first 50 pages of Mrs. Everything were a little slow, but from there it took off and was a book I found myself always eager to get back to. I enjoyed reliving much of the 60’s, 70’s, 80’s and beyond with Bethie and Jo, while watching their ups and downs, insecurities and failures, accomplishments and loves. Mrs. Everything is ultimately a women’s history story through the lens of one small family, but really it’s EVERY WOMAN’s story. With Mrs. Everything I’m a renewed fan of Jennifer Weiner. Grade: A-