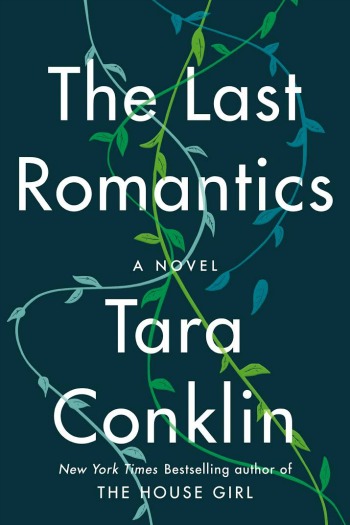 A rich family love story of four siblings, from their unusual childhoods, through the strains of young adulthood, and beyond.

“A sweeping yet intimate epic about one American family, The Last Romantics is an unforgettable exploration of the ties that bind us together, the responsibilities we embrace and the duties we resent, and how we can lose—and sometimes rescue—the ones we love. A novel that pierces the heart and lingers in the mind, it is also a beautiful meditation on the power of stories—how they navigate us through difficult times, help us understand the past, and point the way toward our future.”

Fiona’s Narration – In the Skinner family there were four children, Renee, Caroline, Joe and Fiona. Fiona, the youngest tells the story of her family from a ripe old age of 102. The year is 2079 and Fiona, a renowned poet is giving a presentation where she’d asked about her most famous work The Love Poem. The timing is right and circumstances are such that Fiona finally decides to tell the whole story of the inspiration behind that poem. In doing so, Fiona also shares the unusual story of her family’s life. This structure ended up working beautifully. While Fiona was focused on her own perspective the story unfolded in first person, but from a very intimate place Fiona was also able to tell the stories of each of her sibling, their triumphs and struggles. The focus in The Last Romantics moved from sibling to sibling, but the others were always also present. Fiona’s narration unfolded like a love letter to her family.

Character Driven Story – Every single one of the characters in The Last Romantics was vivid and real. Conklin did a beautiful job creating characters that you really felt like you knew and always wanted to know more about. In the opening, just after their father has died, the four siblings are forced to raise themselves for several years as their mother essentially drops out of life during that time. The life they lived then set the stage for the rest of the novel as each character moved through life with their mother’s long “Pause” never being forgotten. Unlike many other novels, these kids forgave their mother’s extended mental absence, and forever sought to protect her. Like the rings from a rock tossed into a pond, throughout the book whatever happened to one character tended to affect them all.

“I believe this was the moment when we each assumed responsibility for our brother, Joe. A lifelong obligation of love that each of us, for different reasons, would not fulfill. We would try: Renee in her studied, worrisome way; Caroline carelessly with great bursts of energy followed by distraction; and myself, assuming that Joe would never need me, not in the way that I needed him. Years later this assumption would prove to be wrong. But by then it would be too late.”

If you were to ask which of the siblings I liked the most, I couldn’t say. I liked them all for their strengths, their weaknesses and their love for each other.

Manifestations of Grief – Like any family saga, grief plays a role in The Last Romantics, and Conklin continually highlighted how that looks different on everyone. From the “Pause,” to Joe’s continual longing to see his father once again, and much more, each character experienced and dealt with their grief in very different ways. It moved me and was always on point.

“Friends and family milled around us, and yet each of us stood in that space alone. It was as though the care we had shown each other as children had been revealed as faulty, flawed, riddled with holes. Now we avoided any interaction that reminded us of what we once assumed ourselves to be”

Full Circle Story – The Last Romantics began in 2079, but spent most of its time in 1980-2010. Periodically, Conklin returned the reader to the future and also ended there. I liked these brief interludes into another time and felt like they set the ideal tone for this book.

An Epilogue Without the Moniker – The last several pages of this book filled in all the details of what happened to the many characters in The Last Romantics during the 50 years not covered in the book. While it didn’t take anything away from the rest of the story, I didn’t need to know those details. For me, Conklin’s book was already complete without it. However, lovers of epilogues will appreciate this I’m sure.

The Last Romantics was truly a great family love story, and isn’t that really the best sort of love story? The characters were rich, the sibling bonds amazing, and the handling of grief powerful. It was one of those books where I couldn’t stop reading, but also didn’t want to finish. It’s my first book hangover of 2019. I’ve got some pretty amazing reading ahead of me if The Last Romantics doesn’t make my Top Ten Books of 2019. Grade: A

I really can’t do better than the three books mentioned above. I think the comparison to Commonwealth (my review) is especially good, but The Last Romantics has much of the same flavor as The Interestings and Little Fires Everywhere (my review), too. A fourth might be: