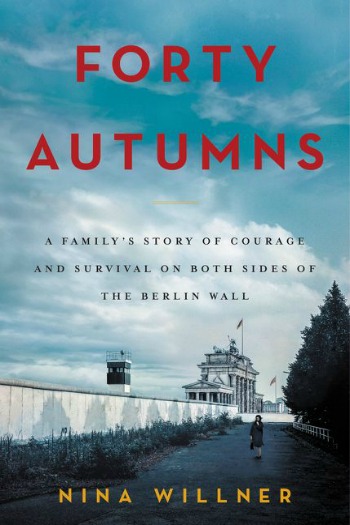 In the wake of WWII, a German family is divided when one daughter flees to the West, as the rest of the family finds themselves absorbed into communist East Germany.

“In this illuminating and deeply moving memoir, a former American military intelligence officer goes beyond traditional Cold War espionage tales to tell the true story of her family—of five women separated by the Iron Curtain for more than forty years, and their miraculous reunion after the fall of the Berlin Wall”

A History Lesson – I’ve read many, many WWII novels, yet very little about the post war years, and certainly nothing about those years in East Germany. The lives of Nina Willner’s family documented life in East Germany, first under Soviet rule and later under even harsher rule by the country’s own communist leaders. Like most East Germans, Willner’s grandparents, aunts and uncles always had to guard their words and actions lest the secret police become aroused. Her grandfather spent three years in an asylum because he dared to question how farmers were being treated. After ordering a car, it took her uncle 12 years to actually get one. Food and jobs were in short supply and the quality of goods was poor. Citizens were fed a constant diet of propaganda against the West. For years many knew no better as the East was blocked almost completely from access to news beyond their borders.

Both Sides of the Wall – Willner juxtaposed the life of her mother, Hanna (who escaped to the West), with that of her siblings left in the East. It was fascinating to hear how different the lives of the siblings became. Hanna living in the U.S. had a life of ease and access to most anything she wanted, except her family. Those left behind, relished their family ties, but lived a life where they were constantly on guard and often wanting.

Reunification – While I vividly remember the fall of the Berlin Wall and the reunification of Germany, I’d thought little about the reuniting of German families. I teared up many times at the end of Forty Autumns as Hanna, her brothers and sisters, and their children finally saw each other after forty years apart.

Nina Willner did a beautiful job of telling much more than just her family’s story. Forty Autumns was really the story of a nation held captive long after the end of WWII. Her family was the catalyst, but their story (in slightly different forms) undoubtedly mirrors that of tens of thousand East German citizens. I know I’m grateful to Willner for shedding light on their suffering and even more so on their spirit and fortitude. Grade: A

Narration: Overall, I thought Cassandra Campbell did a good job narrating Forty Autumns. Her reading was clear and always easy to understand, yet just a little “NPR-ish” for my taste. Grade: B