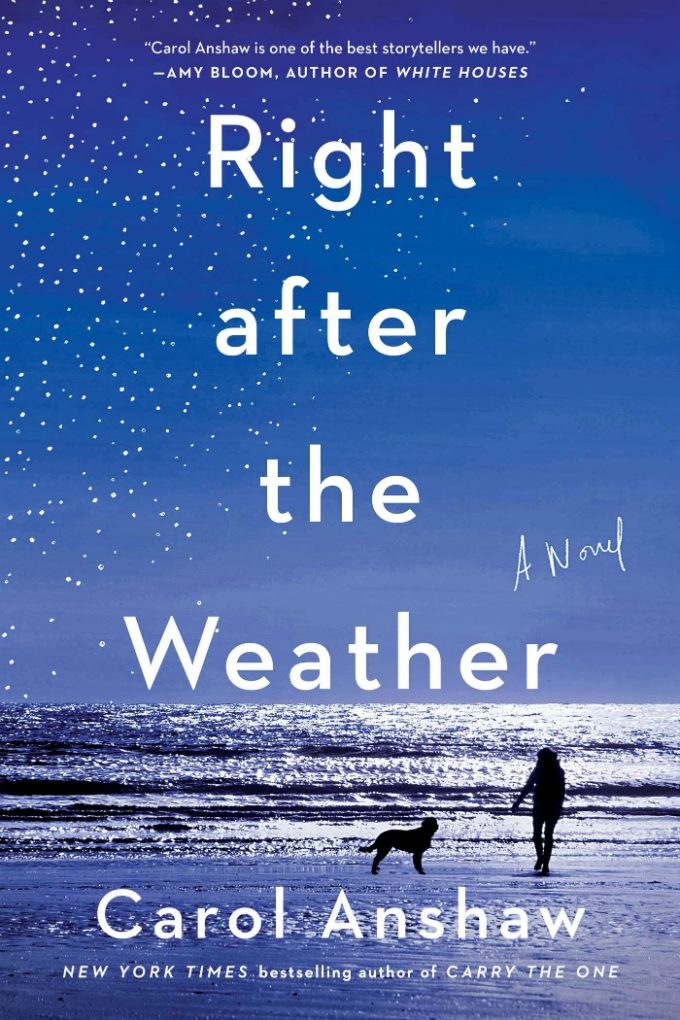 At 42, Cate, still struggling to figure out exactly what she wants from life, gets the big break she’s longed for, only to have her life upended by a horrific act of violence.

“It’s the fall of 2016. Cate, a set designer in her early forties, lives and works in Chicago’s theater community. She has stayed too long at the fair and knows it’s time to get past her prolonged adolescence and stop taking handouts from her parents. She has a firm plan to get solvent and settled in a serious relationship…” (The publisher’s blurb tells you WAY too much. My advice, skip it!)

Right After the Weather by Carol Anshaw was a very different sort of story and one that I enjoyed from start to finish. I found its central character, Cate, immensely appealing. At 42, she was still a bit of a mess. She’d always worked as a set designer in the Chicago theater world, having gained respect, but never quite breaking through to the next level. Cate’s long-ago ex-husband (even more of a mess than Cate) was camped out in her guest room and Cate, herself, was torn between her relationships with two different women. Throw into all this Neale, Cate’s best friend since childhood, and her son Joe, and you’ve got a full cast of interesting characters hovering around Cate.

At first Right After the Weather might seem like a simple a story of how Cate figures out life and finally becomes a real grown up. And in fact, much of the story did revolve around her struggles with knowing what was healthy, knowing what she should be doing, yet wanting something different. That struggle made Cate so likable and so endearing to me. I found myself rooting for her, even as I knew something terrible was going to happen.

“Now a heavy velvet curtain has risen, revealing all around her a lively pageant of possible danger. She not only sees it, but feels it whispering over her skin, as though, even when she’s fully dressed, a fresh patch of nakedness has presented itself. The very peculiar thing is that this doesn’t make her frightened; rather, it enlivens her.”

I refuse to give away as much as the publisher, but will say that Cate’s life was upended by an act of violence she could have never anticipated. (If you want more details, read the blurb). The second half of the book, Cate is still trying to keep her life moving forward, all the while dealing with what happened; its affect on her, but even more so on Cate’s relationships with the people most important in her life. The ending was bittersweet, but so well played by Anshaw. I don’t think Right After the Weather will be a book for everyone. Some might shun the violence or the quirky characters, but for those who enjoy a little grit and a story that feels very real, this is a book you should definitely read. Grade: B+