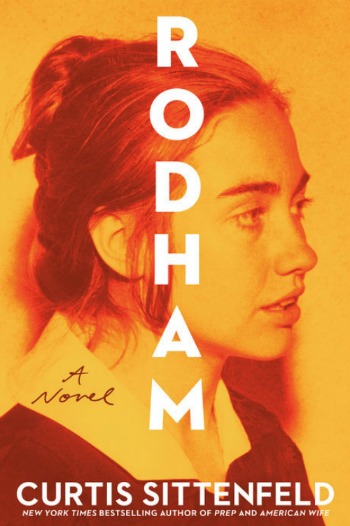 A reimagined life for Hillary Rodham had she not married Bill Clinton, leads her down a different path, while still traveling toward the same destination.

“…But in Curtis Sittenfeld’s powerfully imagined tour-de-force of fiction, Hillary takes a different road. Feeling doubt about the prospective marriage, she endures their devastating breakup and leaves Arkansas. Over the next four decades, she blazes her own trail—one that unfolds in public as well as in private, that involves crossing paths again (and again) with Bill Clinton, that raises questions about the tradeoffs all of us must make in building a life…”

I’m going to say right up front that I voted for Hillary Clinton and every single day I grieve that she’s not the one sitting in the White House. I fervently wish her path had been different, allowing her to become our long overdue first female president. But, that is only the beginning of why I enjoyed Curtis Sittenfeld’s Rodham so much.

Rodham started out true to life, beginning with Hillary Rodham’s graduation address at Wellesley College that landed her in Life magazine. It then moved on to her time at Yale Law School where she met and fell in love with Bill Clinton. Their relationship continued after law school, and she eventually followed him to Arkansas so he could run for office. He proposed to her three times. In her real life she finally said yes that third time. In Rodham, she saw too much heartache in a life with Bill and said no, leaving to make a life on her own.

“The margin between staying and leaving was so thin; really, it could have gone either way.”

But, in Rodham, it went the way of leaving and from that point on, Sittenfeld gives Hillary a life still drawn toward politics, but in her own circle of light. Along the way she cultures great friendships and allies, but also stumbles, making mistakes that opponents use to try to tear her down. Just like in the political world we live in. Hillary becomes a senator and runs for President more than once. Just like in real life. She faces cruel, personal attacks based more on her sex, than her competency. Just like in real life. At rallies for one of her opponents, people chant the cruel phrase, “Shut her up!” Just like in real life. Sittenfeld reimagines Hillary’s life, but she doesn’t reimagine the world she lives in.

Rodham has been one of the few books I’ve read during the coronavirus pandemic that has been able to hold my interest from start to finish. In itself that’s quite an accomplishment! I thoroughly enjoyed getting to see Hillary having a different life, a life of her OWN. The last 10% of the story wasn’t my favorite. I wish it could have been handled a little differently, been a little less smarmy, but I also can’t think of a different way to have handled it. Whether or not you voted for Hillary Clinton, spending a few days with Hillary Rodham will be well worth your time. Grade: A-

Note: I received a copy of this book from Random House (via NetGalley) in exchange for my honest review.