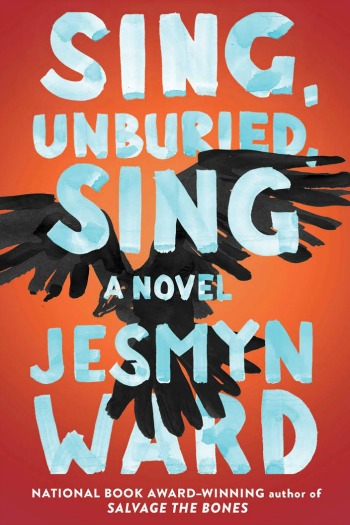 Combining the disparate elements of a ghost story and a road trip novel Ward delivers a rich American story of what it means to be poor and black in rural Mississippi.

“Drawing on Morrison and Faulkner, The Odyssey and the Old Testament, Ward gives us an epochal story, a journey through Mississippi’s past and present that is both an intimate portrait of a family and an epic tale of hope and struggle… Sing, Unburied, Sing grapples with the ugly truths at the heart of the American story and the power, and limitations, of the bonds of family.”

Vivid Characters – In Sing, Unburied, Sing Jesmyn Ward manages to deliver characters so thoroughly developed, so vividly drawn, that I felt like I’d know them anywhere. This was no small feat for a cast that included an old man with a past he was ashamed of, a drug-addicted mother, a 13-year old boy striving to walk the line between being a boy and a man, a second boy, a ghost in search of a way home, and many more.

“It feels good to be mean, to speak past the baby I can’t hit and let that anger touch another. The one I’m never good enough for. Never Mama for. Just Leonie, a name wrapped around the same disappointed syllables I’ve heard from Mama, from Pop, even from Given, my whole fucking life.”

A Story Inside a Story – Within this beautiful novel Ward planted stories within each other, like Russian nesting dolls. On the outside was Pop, patriarch of a poor black family, and a man struggling to live with honor and dignity. Pop cared for his dying wife and two grandchildren, but had a past that would never quite let him go. Next, Pop’s daughter, Leonie fought through a drug-addled haze, to be with Michael, the father of her children. Michael, the son of a racist white sheriff, was about to be released from prison and Leonine was determined to be there for him. Finally, were Richie and Given, ghosts/spirits who weren’t quite finished with their lives. And through it all was JoJo, the 13-year old boy whose eyes were always open: seeing, observing, questioning. Ward fit her stories together seamlessly.

Flat-out Beautiful Writing – Sing, Unburied, Sing was no easy story to tell. Hope and struggle were at its heart, but along the way Ward tackled racism, the poverty cycle, drugs, death, and parts of America’s shameful history. Never preachy, sometimes painful, often wise, always powerful, Ward’s writing could not have been better.

“When I was thirteen, I knew much more than him. I knew that metal shackles could grow into the skin. I knew that leather could split flesh like butter. I knew that hunger could hurt, could scoop me hollow as a gourd, and that seeing my siblings starving could hollow out a different part of me, too.”

“The tires catch and spit gravel. We hold hands and pretend at forgetting.”

Everything about Sing, Unburied, Sing worked for me. Initially, I was a little resistant to the the characters coming from beyond, but was quickly won over by their roles in the story.

I cannot say this was an easy book to read, but I can say that I loved it. The themes were difficult, the story sad, but the telling was magnificent. Ward delivered a beautifully layered story of a family haunted by both the past and the present. Sing, Unburied, Sing may well leave you haunted, too, for its a book you won’t soon forget. Grade: A