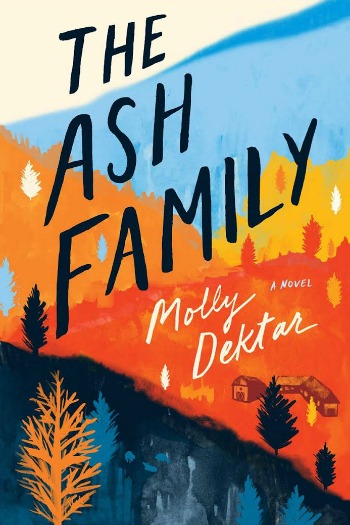 Nineteen year old Berie doesn’t know what she wants out of life, but she knows it’s not college, so when a charismatic stranger offers her refuge with a new kind of family, Berie wants nothing more than to become a part of it.

“At nineteen, Berie encounters a seductive and mysterious man at a bus station near her home in North Carolina. Shut off from the people around her, she finds herself compelled by his promise of a new life. He ferries her into a place of order and chaos: the Ash Family farm. There, she joins an intentional community living off the fertile land of the mountains, bound together by high ideals and through relationships she can’t untangle. Berie—now renamed Harmony—renounces her old life and settles into her new one on the farm. She begins to make friends. And then they start to disappear.”

A Girl Lost – Even though I sometimes found Berie/Harmony incredibly flawed, I also found her very endearing. Not every high school graduate is ready for college come September. Some need time and space to figure out what they want from life and Berie epitomized that young person. Her single mom had big dreams of Berie getting further in life than she had and college was her solution. Isaac, Berie’s boyfriend, pushed her to start her real life and to do so in college. Yet, Berie was only going through the motions, sensing at her core that college wasn’t going to give her what she was looking for. The bigger problem was that Berie didn’t really know what that was. She cared about the environment, but more than anything, she just wanted to feel like she really belonged somewhere. So, when a stranger approached her at a bus station and offered her a respite from the life she was leading, Berie jumped at it. All she had to do to really belong was learn that there was no self; there was just the family. And, Berie had to learn to follow “the rules.”

“My eyes filled with tears. I wondered if my mother had limited me or betrayed me or let me down. Not exactly, not specifically, but that didn’t make Dice’s grip on my shoulder any less true, and I began to forget how much I loved the flecks of rainbow twirling off those diamond earrings, my inheritance from her, her love of small beauties.”

An Off-the-Grid Community – I found the setting of The Ash Family incredibly appealing. To begin with, a self-sustaining farm in a mountain holler provided a rich background for “Harmony’s” new life. As she learned about the rigors of caring for cows and sheep, growing crops, surviving harsh winters and reveling in the abundance of summer, so too did the reader. Then, just as Harmony learned about the philosophies of the Ash family’s charismatic leader, so did the reader. As she struggled to understand what life in the Ash family meant, so too did I.

Queen – Of all the characters in The Ash Family, I most appreciated Queen. Another young woman adopted into the family, Queen somehow had held onto parts of her own life. She was ashamed of her past and remained devoted to the family, but she also questioned the rules and even stood up to them.

Incredible Naivety – As much as I liked Berie/Harmony, her willful naivety became frustrating because it seemed too unreal. So much happened around the farm that Harmony just accepted without question. She seemed like too smart a girl to turn a blind eye as often as she did. Even the fact that she didn’t want to go to college, but hadn’t talked about it with her mom felt so unlikely. Dektar provided reasoning for these things, but I had a hard time buying into those reasons as often as Dektar asked me to.

Too Little Character Development – Other than Queen, the reader never really learned much about the other members of the Ash family, outside of their interactions with Harmony. Understanding the leader, Dice, and his right-hand man, Bay, might have provided a little more balance to the story.

The First 20% – If you plan to read The Ash Family, be prepared to keep going through the very slow start to Berie/Harmony’s story. I nearly DNF’d it, but trapped on a plane, I kept going. I’m very glad I did! Once Berie’s story finally began to come together I was much more engaged and eager to discover where debut author Molly Dektar was taking me.

As you can already tell, I both liked and didn’t like parts of The Ash Family. Sometimes it rambled and Berie’s lack of clarity throughout grew frustrating. By the end I wondered if she had really grown or even learned much about herself. Still, I enjoyed being along for her unusual journey and found myself still concerned for her after the book had ended. This is the rare novel where I might have liked an epilogue! Grade: B

Note: I received a copy of this book from Simon & Schuster (via NetGalley) in exchange for my honest review. Thank you!