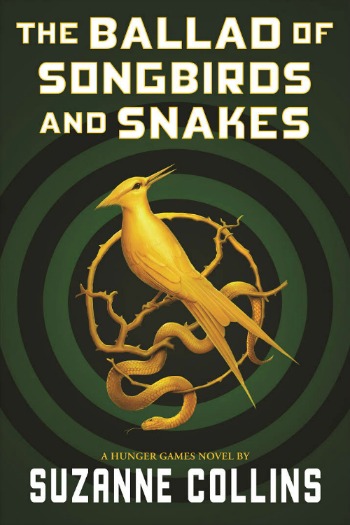 In her newest book, Suzanne Collins returns us to Panem with a glimpse into the troubled life of young Coriolanus Snow who we know grows into the much feared President Snow.

“It is the morning of the reaping that will kick off the tenth annual Hunger Games. In the Capitol, eighteen-year-old Coriolanus Snow is preparing for his one shot at glory as a mentor in the Games. The once-mighty house of Snow has fallen on hard times, its fate hanging on the slender chance that Coriolanus will be able to outcharm, outwit, and outmaneuver his fellow students to mentor the winning tribute…”

Like many other readers, I was a huge fan of The Hunger Games Trilogy, despite the fact that I generally do NOT do series and do NOT go for young adult. I originally picked up The Hunger Games because I was literally seeing it on the desks of almost EVERY seventh grader in my school. In fact, one student loaned me her copies of the first two books. Each morning students would gather round to hear exactly where I was and how much I loved the stories. I teach math, so it was really fun and different for me to get to talk about these books with the kids. I loved them every bit as much as my students.

The Ballad of Songbirds and Snakes takes us back 64 years to the 10th annual Hunger Games. Coriolanus is 18-years old and in his last year of school. Both his parents died in the war and he lives with his grandmother and cousin, Tigris. The three are just barely getting by, as the war devastated their family fortune. We know the evil, much reviled man Snow will become, but at 18 he’s likable, kind, innocent, and ambitious, with just a hint of something more.

“He should have been exhausted, but he felt a nervous energy running through him, and the announcement that the Academy would still be holding classes gave him a boost. Being a hero at home had its limitations; he needed a larger audience.”

The Hunger Games are not yet the huge event that they one day become and an effort is being made to up people’s interest. For the first time they are allowed to bet on the games, to deliver rewards to the players, and each player now has a teenage mentor. Coriolanus is selected to mentor the girl from District 12, Lucy Gray. This is their story.

Readers looking for a return to the intensity of being in the arena with players during a Hunger Games, might be disappointed in Collin’s prequel. Yes, a Hunger Games occurs, but it is only one focus of The Ballad of Songbirds and Snakes. The much bigger stories are the cruel, violent, and heartbreaking events that put Coriolanus on to the path of becoming President Snow. I did miss the intensity, and felt like the book moved a little slowly at times, but was always eager to get back to reading and to learn more about Snow’s young life. If you were a fan of The Hunger Games trilogy, I think you’ll enjoy The Ballad of Songbirds and Snakes just as long as you go into it knowing you’ll be getting a vastly different type of story.  Grade: B