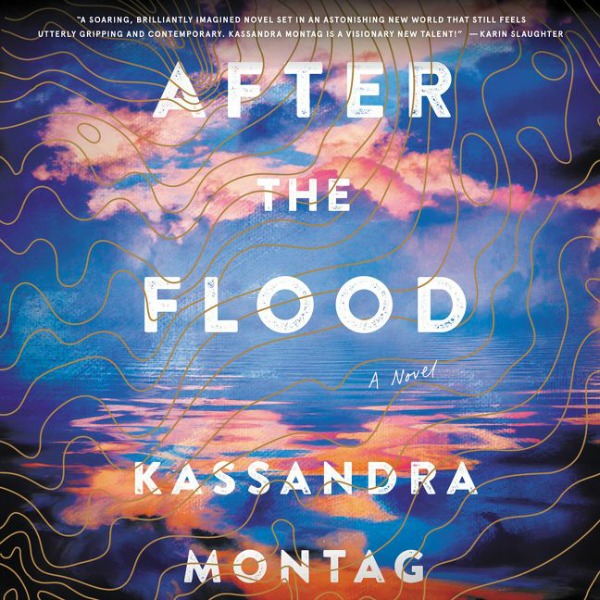 In a danger-filled future world nearly covered by water, a mother risks everything in her quest to find the daughter cruelly snatched from her seven years earlier.

“A little more than a century from now, our world has been utterly transformed. After years of slowly overtaking the continent, rising floodwaters have obliterated America’s great coastal cities and then its heartland, leaving nothing but an archipelago of mountaintop colonies surrounded by a deep expanse of open water….A compulsively readable novel of dark despair and soaring hope, After the Flood is a magnificent, action packed, and sometimes frightening odyssey laced with wonder—an affecting and wholly original saga both redemptive and astonishing.”

A post-apocalyptic story always generates a little fear, a little what if, a little could it really happen? That’s especially true of After the Flood, set about a hundred years in the future where climate change has rendered the Earth a planet covered in water, with the only remaining land being tall mountains. But, this isn’t a book making a political statement. The flooded world just is and people have had to adapt or perish. The story itself has almost a western quality to it, as people try to eek out a living for themselves on the sea, or on coveted plots of land, moving frequently, making trades, fighting for themselves and those they love. Raiders, powerful gangs trying to overtake and dominate, keep everyone else scared and fleeing.

In the midst of this frightening new world are Myra and her 7-year old daughter Pearl. The two have been on their own for six years, making ends meet by catching fish from their traveling home, a small sailboat. Myra dries and sells the fish at different trading posts along the vast ocean shores. Everywhere she goes, Myra looks for her older daughter, Row, cruelly taken from her before Pearl was born. When she finally stumbles upon a lead Myra will stop at nothing to find Row, despite the toll that takes on Pearl.

Sharing much more would be spoiling the story for you. I’d also advise AGAINST reading the publisher’s full description as it gives a lot away. I will say that After the Flood surprised me in just how much I enjoyed a story of pure adventure. Myra and Pearl move from one dangerous situation to the next, working with others and finding a different sort of family along the way. This was one of those audiobooks I simply could not stop listening to and found myself searching for opportunities to squeeze a little more in. I think After the Flood is the perfect book for people who think they don’t like dystopian novels and for those who do? You’re in for a treat. I can hardly wait to see what debut author Kassandra Montag does next! Grade: A

Narration: After the Flood is told in first person by Myra who has a huge range of emotions, from grieving mother to fearsome warrior and Hillary Huber covered it all beautifully. Many characters appear in the story and Huber seemed to be able to give each one their own unique sound. I’d have known each character even without hearing their names attached. Huber is definitely a narrator I look forward to listening to again. Grade: A