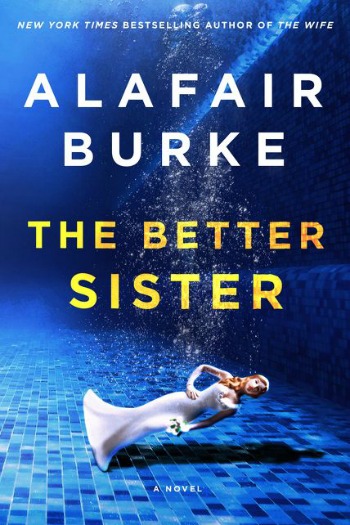 When Chloe finds her husband lying dead in their home, the question becomes who might be responsible: an intruder, his son, his first wife who happens to be Chloe’s older sister, or Chloe herself?

“Keep your enemies close and your sister closer.

Though Chloe was the younger of the two Taylor sisters, she always seemed to be the one in charge. She was the honor roll student with big dreams and an even bigger work ethic. Nicky—always restless and more than a little reckless—was the opposite of her ambitious little sister. She floated from job to job and man to man, and stayed close to home in Cleveland”

Sisters Once Divided, Now United – Sisters Nicky and Chloe Taylor have a complicated history to say the least. Nicky, always a bit of a wreck, was once married to the now dead Adam, and she’s the mother of his son, Ethan. Through a chain of events, her marriage to Adam ended, and several years later he married Chloe, the stable sister, and the two raised Ethan as their son. For obvious reasons, the sisters spoke rarely and saw each other even less often. That all changed after Adam’s murder when Ethan became the prime suspect.

“As I walked Valerie to the door, I could feel Ethan’s eyes following her. It would be weeks before I asked myself whether that was yet another sign that something was deeply wrong with my son.”

Through the course of the story the two women must find a way to unite to save the son they both love. Theirs was a fun relationship to watch evolve.

Nicky – I especially liked the character of Nicky. She’d had a lot of problems in her past, but she’d also been treated harshly and had reasons for some of what she’d done. In the present Nicky was a fun, free-spirited woman who supported herself by making jewelry and selling it on Etsy. I found her the perfect foil to high-strung, socially conscious Chloe.

Light, Easy Domestic Thriller – This story of a murdered man and the tangled family he left behind was perfect reading while on vacation. It was easy to pick up and put down and get right back into the complex lives of the Taylor sisters.

Courtroom/Trial – The second half of The Better Sister focuses on a trial for Adam’s murder and this was where the story really took off for me. Burke’s background as a prosecutor came through in that part of this story and definitely felt the most authentic of all its elements.

Chloe – I don’t want to give anything away, so I can’t say a lot, but much about Chloe just didn’t add up. She was a highly regarded journalist winning huge awards for her work in a “#MeToo” like movement, yet she feared any sort of revelations about her own life, constantly worrying about what others would think. Chloe seemed like too big of a hypocrite for my tastes.

Adam – The entire story of The Better Sister revolved around Adam and why someone might want to murder him, and yet as each piece of the puzzle was revealed the picture became messier. Nothing about Adam rang true. It was almost as if he had a split personality! Again, I can’t give much away, but the logic of some of the things Burke had Adam doing just didn’t fit with other parts of the character. People don’t just change and then change back on demand and yet that is what Burke required of Adam for her story to truly come together.

I like a good domestic thriller, and The Better Sister was fine in that regard. Just fine. Just. Too much of the story surrounding Adam and Chloe required the reader to simply buy into it, to suspend disbelief. I’m fine with a little of that, almost all thrillers need it, but in The Better Sister it was simply too much for me. Grade: C+

Note: I received a copy of this book from the Harper (via NetGalley) in exchange for my honest review. Many thanks!