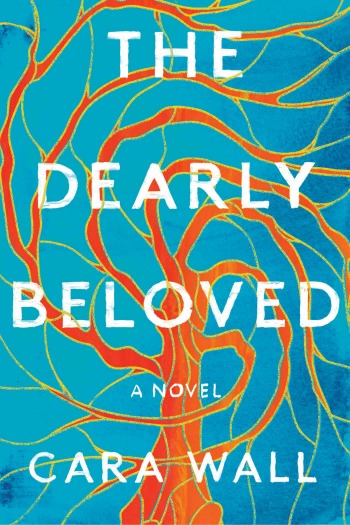 Four wildly different people must find a way to navigate marriages, friendships, and the rapidly changing world around them, all while struggling to find their own versions of faith.

“Charles and Lily, James and Nan. They meet in Greenwich Village in 1963 when Charles and James are jointly hired to steward the historic Third Presbyterian Church through turbulent times. Their personal differences however, threaten to tear them apart…In The Dearly Beloved, we follow these two couples through decades of love and friendship, jealousy and understanding, forgiveness and commitment…”

Let’s just get to the bottom line here. I loved The Dearly Beloved and I know many others will, too. If you haven’t already, put in a library hold NOW! This is a book that will surprise and delight you in so many ways.

I wasn’t sure how I’d feel about a story centered on two ministers; there might be too much religion and not enough beyond. I needn’t have worried. The Dearly Beloved is not a story about religion, but one about faith in all its manifestations. Until I read it, I’m not sure I’d have seen much of a distinction between the two. Throughout the story debut author Cara Wall shone a light on faith over and over, and in doing so brought her characters to life. Co-pastors, Charles and James, held very different thoughts on faith, and with that the role of God in their lives and the nature of their roles as stewards of God. I enjoyed their explorations of (and struggles with) faith immensely. It made them so normal, so human.

The other side of The Dearly Beloved focused on the relationships between all four of the main characters, Charles and Lily, James and Nan. The first part of the book introduced the couples, how they met, fell in love and created lives together. After the men took positions at the same NYC church, all their relationships came into focus, with some being easier than others. Sweet Nan, daughter of a southern minister, grew up blessed in many ways. Atheist Lily was touched by tragedy at 15 and never fully recovered.

“And now, here, was a boy who was telling her, with his whole being, that he believed in the loving benevolence, the hidden meaning, the purpose. He had described his faith clearly; she could not mistake its outline. It sat between them as fresh and essential as the pale frame of a new house. Her heart was racing. She was afraid.”

While the bond between James and Charles was strong from the start, Lily refused Nan’s friendship over and over. She was a prickly character, hard to understand and even harder to like, but I grew to love Lily.

“When had Lily made friends, Nan wondered, and how, and why was she gracious to these women but not to her? Why was she here at all? Just by being in the building, in the room, Lily had put Nan on edge. Siphoned off her ease, left her bitter and resentful. This was Nan’s sanctuary, and Lily’s presence made it itch and burn.”

Note: I received a copy of this book from Simon & Schuster (via NetGalley) in exchange for my honest review.