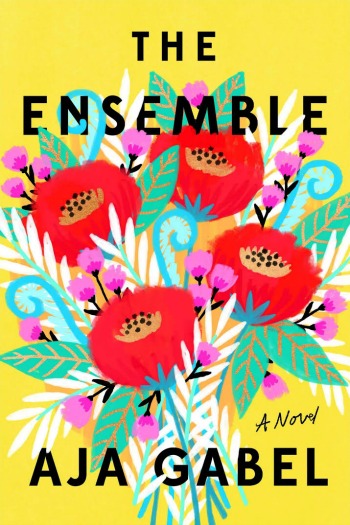 Sixteen years in the lives of the members of a string quartet: their friendships, their relationships, their triumphs, and their struggles.

A Character-Driven Novel – The Ensemble was above all a deep study into the lives of its characters. Readers first meet Jana, Henry, Brit and Daniel in 1994 as they are finishing up grad school and preparing to enter their first serious competition as a string quartet. Personalities quickly emerge. Jana, first violin, is the driving force behind the quartet. Henry, viola and the group’s one true prodigy, is the only one to come from a stable family. Brit, second violin, longs for connections she’s not had since losing her parents. Daniel, cello, grew up poor in a world where no one valued his musical gifts. He has little to offer anyone. Chapter by chapter these four grow and change as they face their own demons and those newly created by their partnership.

Alternating Focuses – I really like the way Aja Gabel changed the main focus of each chapter from one character to another. In doing so she still gave you bits about what was happening with the other three, but through the lens of that chapter’s character. This technique moved the story along nicely with only minimal overlap.

Longevity – Following Jana, Henry, Brit and Daniel for over sixteen years gave me an opportunity to appreciate each character for different reasons and at different seasons of their lives. At times one character’s actions might confuse me or even make me mad, but in the scope of their career, their friendship everything fit. The span of the novel also allowed Gabel to cover all aspects of this quartet’s lives, from professional, to personal, to families and even the concerns of aging musicians.

Emotional Connections – The deep personal connections between these four musicians was one of my favorite parts of the story. Each had relationships and families, but really they were everything to each other. They taught classes together, rehearsed together, traveled together, and played together; when one got sick, they all suffered. But, they also resented each other precisely because they were so intimately connected. None could let go, no matter how badly they might have wanted to.

Little Musical Background – I know very little about classical music or the life of professional musicians, so at times I felt like I might be missing some important elements to the characters’ personas, motives and drives. I think Gabel tried to minimize the need for a musical background, but I still felt like it would have been a help.

A Bit Slow – Getting to know people takes time and especially in the first half I think that made The Ensemble a little slow. Occasionally, the more technical aspects of the music also slowed it down a bit for me.

In the end, I liked The Ensemble very much, but definitely don’t think it will be a book for everyone. This is a book where the characters move the story, not the other way around. So, if you’re a person who appreciates a rich study in personalities, then you should try the Ensemble. It will be worth your time. Grade: B