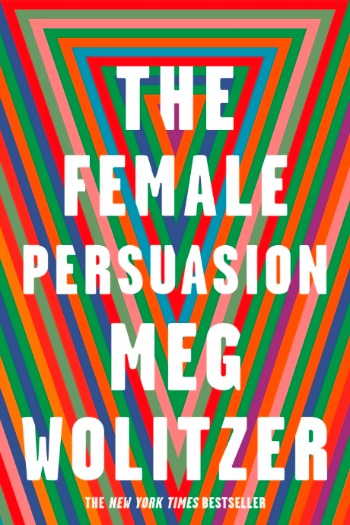 For nearly 15 years, The Female Persuasion follows Greer Kadetsky as she learns to use her “outdoor voice” with the help of a powerful mentor and her own convictions.

“Greer Kadetsky is a shy college freshman when she meets the woman she hopes will change her life. Faith Frank, dazzlingly persuasive and elegant at sixty-three, has been a central pillar of the women’s movement for decades, a figure who inspires others to influence the world. Upon hearing Faith speak for the first time, Greer- madly in love with her boyfriend, Cory, but still full of longing for an ambition that she can’t quite place- feels her inner world light up.”

A Timely Topic – How lucky was Meg Wolitzer that the #MeToo movement and other women’s issues moved so firmly to the forefront of our world these last six months. Could she have asked for a better lead-up to a book featuring characters in the center of the feminist movement? It may have involved some luck on Wolitzer’s part, but I can’t help believing that she had to see some of this coming. It’s time. The Female Persuasion does a beautiful job of framing the history of the women’s movement, while at the same time moving it forward in a world rife with instant access, blogs, and social media. The historical review Wolitzer slipped into her novel leant context to all that is happening today.

Mentor/Mentee Relationship – Looking back on my own life I can find mentors here and there for short bursts of time, but nothing like the relationship Greer had with her mentor, Faith Frank. When Greer reluctantly agreed to go hear Frank speak on a rainy fall evening during her freshman year, she had no idea the lasting impact Frank would have on her. At the end of that evening, Frank slipped Greer a card and though it took her years to use the contact information, just having it brought Greer strength. Later, both women were clear with and comfortable in their roles with one another. Greer wanted to think of herself as more to Frank, but realized there had been others. Frank valued Greer and understood Greer’s needs, but limited their relationship. Faith speaking to a friend about mentoring:

“Showing an interest is only one part,” she said. “You also take them under your wing, if that’s what they seem to want. But then there’s another part, which is that eventually you let them go. Fling! You fling them away. Because otherwise they think that they can’t manage on their own. Sometimes you fling them too hard. You have to be careful.”

The Telling – I appreciated the way Meg Wolitzer chose to structure The Female Persuasion. In addition to the two central characters, Greer and Faith, she used Greer’s boyfriend, Cory and her college best friend, Zee, to fully flesh out the story. Almost all chapters were told from the perspective of one of these four. As expected, those revolving around Faith were powerful and those around Greer propelled the story, but those centered on Zee and Cory were surprisingly touching. In many ways their chapters felt like the heart, the emotional side of this book.

Cory – Some might disagree with me here, but I loved the character of Cory for so many reasons. First, even as a teenager, he so clearly saw the world around him. When Greer’s parents diminished her worth, he was incensed for her. He struggled with high ideals versus paths more easily taken. And when tragedy struck his reaction was far from what might be expected of a man in his early 20’s. In some ways Cory’s part of this story speaks the loudest for feminist ideals.

An Ending That Went Too Far – The last chapter of The Female Persuasion wasn’t called an epilogue, but it felt very much like one. Like most epilogues, I didn’t think it was necessary. Almost everything that the reader learned in that last chapter had already been hinted out earlier in the book. I’d have been perfectly happy had the last chapter been completely eliminated and I was left to fill in any small gaps myself.

Make no mistake about it, I loved The Female Persuasion. No one is quite like Meg Wolitzer when it comes to developing a rich story over a span of years. From the history lessons, to the vivid characters, to the variety of conflicts, to the women’s movement today, this book had it all. One less chapter might have made it perfect, but I still highly recommend The Female Persuasion. Grade: A-