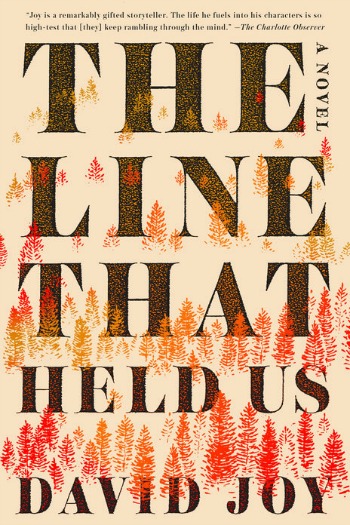 A vivid story of the powers of love and hate, good and evil, and the lengths men will go to protect the ones they most love.

“When Darl Moody went hunting after a monster buck he’s chased for years, he never expected he’d accidentally shoot a man digging ginseng. Worse yet, he’s killed a Brewer, a family notorious for vengeance and violence. With nowhere to turn, Darl calls on the help of the only man he knows will answer, his best friend, Calvin Hooper…”

Rich Multi-dimensional Characters – For the most part, The Line That Held Us is a story of men. Men and the people they care about. Men and the principles they value. Men at odds with one another. Men who all grew up in the same southern Appalachian community that left them with few options and little hope. Without exception, David Joy imbued each of the men in his story with qualities you couldn’t help but admire. He also delivered flaws that could ruin these same men, and sometimes made my skin crawl. I don’t want to give much away, but I loved working out the puzzle that was each man, shocked over and over by the humanity and evil that lived within.

“Nothing seemed real just yet. They were not men accustomed to such darkness. They were ordinary men – work-hard, weekend-warrior, get-up-and-go-to-church kind of men – and what they’d just seen, where they’d come from affected them so. Numbness and disbelief hollowed his insides, a fire trapped in his flesh with the truth of what they carried.”

Vivid Scenes – Time after time, David Joy created vignettes so real I could see them. They caused me to shiver with fear, recoil in disgust, and weep in sadness. To put it simply, Joy took me there; he made me a witness to the goings-on of the men in this novel.

It’s the Writing –The Line That Held Us was a tough, gritty story to read, but doing so was pure pleasure because of the writing. I enjoyed Joy’s last book, where the writing was strong, but here his writing WAS the star. Time after time, I found myself reading passages over and over, not because they weren’t clear, but because they so stunningly captured the heart and the cruelty of men.

“Mourning found him there, a sorrow so deep that it clenched him into a ball and he sobbed like the world had ended. Seconds were hours and minutes were days, years passed in the decades of tears, a thousand or more before the feeling waned enough for him to make the call.”

Religious Undertones – This isn’t truly a dislike, but more of a warning. There is a religious element to the story that at first surprised me and maybe even turned me off a bit, but I need not have worried. The further you read in The Line That Held Us, the more important that element of personal faith becomes.

Epilogue – I CANNOT believe I’m going to say this, but I this is one story where I wished there had been an epilogue. I wasn’t quite ready to let go of a couple of the characters and wanted to know where they’d land. Again, not really a flaw.

I loved The Line That Held Us. It was one of those books I’d passed on more than once and finally turned to out of a bit of desperation. I had no real expectations, but immediately found myself engrossed in the story. It was a book that I both couldn’t put down and didn’t want to finish. If you’re in the mood for a gritty story, beautifully told, I highly recommend David Joy’s latest offering. Grade: A