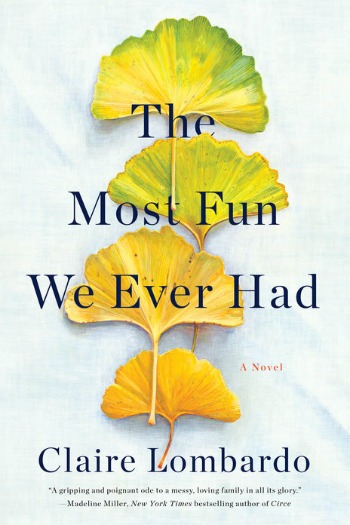 The Most Fun We Ever Had by Claire Lombardo (debut)
Publisher: Doubleday
Release Date: June 25, 2019
Length: 544 pages
Amazon

The four daughters of Marilyn and David Sorenson have had front row seats to their parents’ amazing marriage, but as each reaches adulthood she struggles with how truly high the bar has been set.

“Spanning nearly half a century, and set against the quintessential American backdrop of Chicago and its prospering suburbs, Lombardo’s debut explores the triumphs and burdens of love, the fraught tethers of parenthood and sisterhood, and the baffling mixture of affection, abhorrence, resistance, and submission we feel for those closest to us.”

I’ve said it before and I’m sure I’ll say it again, but it bears repeating, “Every family has a story.” That is especially true in Claire Lombardo’s gorgeous debut, The Most Fun We Ever Had. Spanning nearly 50 years and over 500 pages that flew by, Lombardo delivers to us the Sorenson family with all their triumphs and failures. Always maintaining focus on the family, she wisely told her story in alternating timelines.

One began in 1975 as Marilyn and David first met, fell in love and married. That timeline moves slowly forward as the reader gets to know the Sorensons as a couple and as parents. We’re introduced to each of their four daughters and watch them grow up, change and begin their own lives. This is the timeline where we really get to know this family of six, though it takes all 500+ pages and the journey right up until 2016 to truly understand them.

I’m giving nothing away when I tell you that the catalyst for the second timeline, is the arrival of Jonah, a 15-year old boy who had secretly been given up for adoption by one of the sisters. This is not a family that wants to let go of one of their own, yet Jonah’s arrival stirs the pot of tensions between sisters that has been threatening to boil over for many years. As the two timelines finally mesh, the full picture of the Sorenson family finally becomes clear.

I loved so much about The Most Fun We Ever Had, starting with the relationship between Marilyn and David. It was so refreshing to read a story about a couple that truly loved each other and were committed to their relationship despite hardships. The daughters’ frequent embarrassment with their parent’s amorous behavior just added to the beauty of their marriage.

“The room spun again. Kid made her think of her parents, suddenly, of her father bowing theatrically to her mother at Wendy’s wedding, hearing Otis Reading – “win a little; lose a little” – and declaring, “It’s our song, kid.” Every song belonged to her parents it seemed; everything recorded in the last six decades had something to do with David and Marilyn, those two inexplicable people from whom she hailed.”

I also found the complicated relationship created between the two oldest daughters, Wendy and Violet, especially poignant. If you’re a fan of family dynamics and/or character-driven stories, you will love The Most Fun We Ever Had. I predict you’ll find it high on my list of top books for 2019. Grade: A