Last week as I read The Silence of the Girls by Pat Barker I found it impossible to separate its story form that of The Song of Achilles by Madeline Miller. I read The Song of Achilles less than four months ago and it remained vivid in my mind. These novels are each retellings of The Iliad, but from different perspectives. As such they have much, much in common. Because I read them so close together, neither will ever be able to stand completely alone for me and that’s okay. Today, I’m happy to share a bit about both books including how very much I enjoyed them. 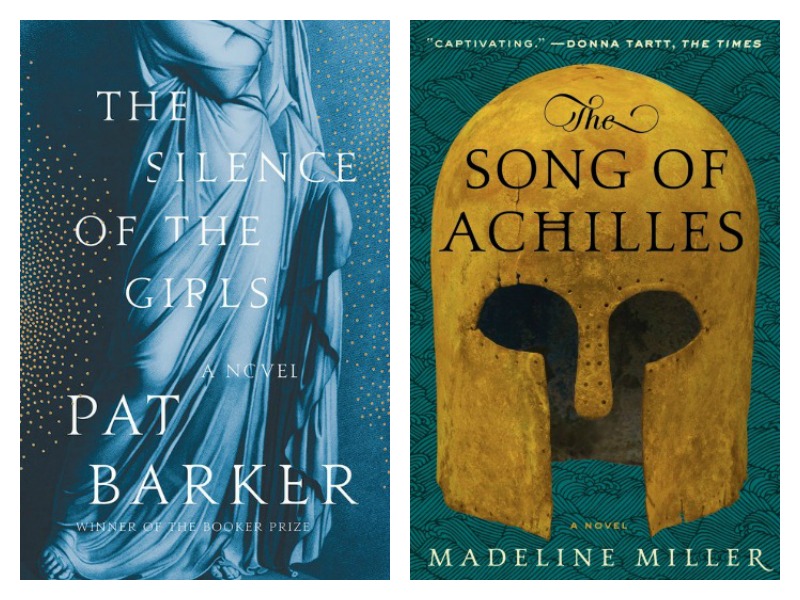 “Great Achilles. Brilliant Achilles, shining Achilles, godlike Achilles…How the epithets pile up. We never call him any of those things; we call him “the butcher.”

As The Silence of the Girls opens, the kingdom of Lyrnessus is under siege by “the butcher” and his army. The men slaughtered, the riches plundered, the women taken for slaves and bedmates. We see the harsh realities of war through the eyes and voice of Briseis, beautiful, young wife to the slain king. Awarded to Achilles as a prize for his victory, this is her story, that of a woman surviving amidst the trappings of a war thrust on her by men.

The Song of Achilles starts further back, when Achilles and Patroclus were boys growing up together under the watchful eye of Achilles’ father. It’s the story of the relationship between the two men from boyhood through the long Trojan War. At its core, The Song of Achilles is a love story with Briseis appearing midway through after becoming Achilles’ prize. She becomes almost a friend to Patroclus and a witness to the devotion he and Achilles share.

As Briseis told her own story in The Silence of the Girls, I saw Achilles in a much different light than I had in The Song of Achilles. In her story he was a man to be feared both on and off the battlefield. Being little more than a concubine, Briseis had no voice, no hope. Her life was a casualty of the whims of arrogant men. But, even as I read her story, I couldn’t help but think of Achilles and Patroclus from The Song of Achilles and attach the sympathy and compassion I felt for them there. Song took the edge off the blood thirsty warrior.

Being retellings of The Iliad, the personal conflict between Agamemnon (leader of the Greek army) and Achilles (its greatest fighter) took center stage in both books. Accurate to the original, the two men dug in, refusing to let go of their pride, while everyone around them paid the price. In Song, my allegiance could not help but go to Achilles, whereas in Silence my sympathies fell solely with Briseis. Yet in both, the argument at the heart of The Iliad, captivated my attention and kept me up late into the night.

Had you asked me six months ago if I was a fan of Greek mythology, you’d have heard a resounding “NO!” Circe by Madeline Miller (my review) quickly changed my mind. I’ve now read three retellings this year and thoroughly enjoyed them all. My admiration goes to both Barker and Miller for putting a fresh edge on very, very old tales, bringing them back to life for all of us. I know I’ll definitely read more and look forward to doing so.

So, do I recommend both books? Yes! Each shines for its own reasons and though the books arose from the same epic poem, they are their own stories. If like me, you’ve already read The Song of Achilles, keep in mind your biases from it as you read The Silence of the Girls. I guarantee it won’t feel like a reread. If you’ve not read either book, I’d start with The Silence of the Girls. I think it would be ideal to get a woman’s view of Achilles and his flaws, his hubris from Briseis and then turn to The Song of Achilles where you learn more about what might have made him the man he was. Seriously, you can’t lose with either book!

Note: I received a copy of The Silence of the Girls from the publisher, Doubleday, (via NetGalley) in exchange for my honest review. Thank you!