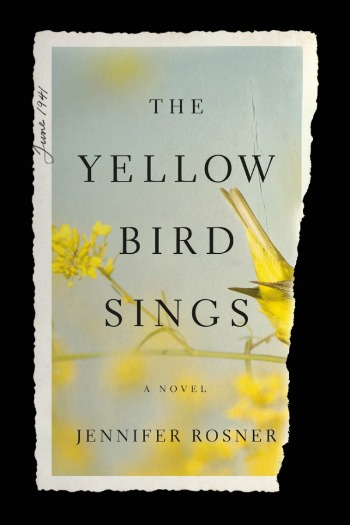 In the midst of WWII, Róża takes her 5-year old daughter, Shira, and flees their home trying to find any way possible to save Shira and herself from almost certain death.

“As Nazi soldiers round up the Jews in their town, Róża and her 5-year-old daughter, Shira, flee, seeking shelter in a neighbor’s barn. Hidden in the hayloft day and night, Shira struggles to stay still and quiet, as music pulses through her and the farmyard outside beckons….Inspired by the true stories of Jewish children hidden during World War II, Jennifer Rosner’s debut is a breathtaking novel about the unbreakable bond between a mother and a daughter.”

I have read A LOT of WWII fiction and loved much of it, but I’ve also reached a point of near saturation with this historical fiction sub-genre. For the last couple years I’ve been extremely selective in which WWII stories I’m willing to invest time in. Those that come at the war from a different angle or an unusual perspective are what I’m most likely to pick up. Even with the extra care in selecting books, I’ve been disappointed in a few, but happily that was not the case with Jennifer Rosner’s debut, The Yellow Bird Sings.

What set this book apart from other WWII stories was the intense mother-daughter relationship between Róża and her young daughter, Shira. Forced to hide her daughter in the loft of a barn for more than a year, Róża is willing to do anything to keep her alive. She sacrifices much of herself to build an almost silent world where Shira’s creative mind can thrive even as both their bodies grow weaker and weaker. I found the time the two spent together in the barn gripping in its very smallness. With little food, cold in the winter, sweltering in the summer, and near constant threat of discovery the two clung to one another with stories of a secret garden, and a love of music.

As the story moved forward, so did their circumstances. What never changed was the instinct to survive woven deep into both their hearts. The longer I read The Yellow Bird Sings, the more I liked it. The second half of the book was especially compelling and the ending not what I had expected. I think I’ll forever by haunted by stories of WWII, and know I’ll always appreciate ones that can touch me in a new way. The Yellow Bird Sings did exactly that. Grade: A-

Note: I received a copy of this book from Flatiron Books (via NetGalley) in exchange for my honest review.