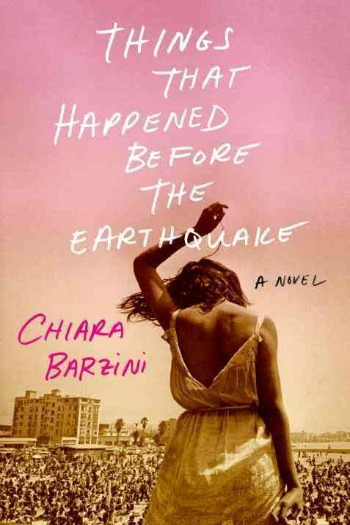 In the summer of 1992, 15-year old Eugenia’s life is turned upside down when her family moves from Rome to Los Angeles in pursuit of her father’s film making dreams.

“Mere weeks after the 1992 riots that laid waste to Los Angeles, Eugenia, a typical Italian teenager, is rudely yanked from her privileged Roman milieu by her hippie-ish filmmaker parents and transplanted to the strange suburban world of the San Fernando Valley. With only the Virgin Mary to call on for guidance as her parents struggle to make it big, Hollywood fashion, she must navigate her huge new public high school, complete with Crips and Bloods and Persian gang members, and a car-based environment of 99-cent stores and obscure fast-food franchises and all-night raves.”

A Laugh Out Loud Beginning – Let me be clear, Things That Happened Before the Earthquake is NOT a light book. Still, Chiara Barzini had me in stitches more than once. The first came as 15-year old Eugenia suffered the humiliation of going with her very Italian family to a California beach for the very first time.

“They moved into the shade, nibbling on their soggy sandwiches, chunks of cream cheese getting stuck in their pubic hair. Grandma graced us by putting her shirt back on the duration of the picnic. I didn’t want to be there.”

From there, things only got worse! Adjusting to a wildly new culture was difficult for the entire family, but Mom, Dad and Grandma had it the worst, much to Eugenia’s chagrin.

Caught Between Two Cultures – When Eugenia’s parents make the decision to move to Los Angeles, she and her younger brother are not happy. They’ve watched the news from LA: rioting over the Rodney King decision, gangs, pollution. Why would anyone want to live there? It’s no better when they arrive and are plopped down into the middle of the San Fernando Valley; sent to schools where they’re obvious outsiders. Eugenia longs for the life she led in Rome, but her survival is dependent on assimilating here. That journey is at the heart of Things That Happened Before the Earthquake. We see Eugenia slowly learn how to navigate through the halls of high school and the larger city around her. She gathers a small motley group of friends, making some wise and same very poor choices along the way.

A Strong Voice – Things That Happened Before the Earthquake is a story told in first person and the voice of Eugenia rings strong and sharp throughout. I clearly felt Eugenia’s frustration with her parents, and the extreme choices they made. She and her brother often had to pay the price for their father’s dreams. Eugenia lived in a world of chaos that she was forced to take for granted. I ached for her as she grappled to find her place in life and suffered along the way. Eugenia’s forays of the heart left me feeling both pleased and melancholy. She made some poor decisions, and her reasons weren’t always obvious, but they felt true to her character. By the end, Eugenia had grown into an entirely new person, one I had begun to admire.

Too Much Detail – At times the detail overwhelmed the story, and in doing so, took away from it. This seems like a small point, but for me was a big flaw. Sometimes the excess detail took the form of odd imagery, such as a rubber suit that Eugenia used as a form of protection when she felt vulnerable. While I appreciated her vulnerability, the suit seemed like overkill.

Trip Back to Italy – Eugenia and her brother spent a summer back in Italy that could have easily been left out of the book. For me it took away far more than it added to the story.

I have to be honest, Things That Happened Before the Earthquake was not an easy book to like. There were times when I was frustrated by the pace and the characters. Eugenia’s journey was painful and slow, but it was also funny and heartwarming. The context of when and where she was really worked and the further I got into her story, the more I liked this book. By the end, I truly loved the person Eugenia had become. If I’d graded this book at the halfway point, it would have been no more than a C, but the last quarter of the book really wowed me. Grade: B-