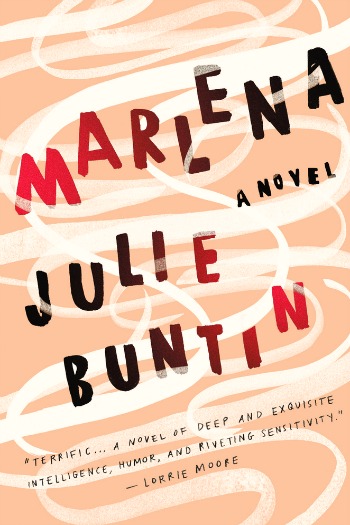 Single Sentence Summary: Resonating with truth, Marlena is a powerful story of the lasting imprint one teenage girl can have on another.

From the Publisher: Everything about fifteen-year-old Cat’s new town in rural Michigan is lonely and off-kilter, until she meets her neighbor, the manic, beautiful, pill-popping Marlena. Cat, inexperienced and desperate for connection, is quickly lured into Marlena’s orbit by little more than an arched eyebrow and a shake of white-blond hair. As the two girls turn the untamed landscape of their desolate small town into a kind of playground, Cat catalogues a litany of firsts―first drink, first cigarette, first kiss―while Marlena’s habits harden and calcify. Within the year, Marlena is dead, drowned in six inches of icy water in the woods nearby.

Review: Though this book is aptly titled Marlena, it’s really Cat’s story. Cat, 15-years old and at her most vulnerable, falls victim to her parent’s failed marriage. Plucked from the comfort of her middle-class, private school life she’s thrust into a manufactured home, on a rundown street, in a rundown town in the far reaches of the upper Michigan peninsula. Feeling lost and alone, Cat does what many 15-year olds do. She rebels, becoming the sidekick to her 17-year old neighbor, Marlena.

Julie Buntin did a wonderful job in building her debut novel, starting with it’s setting. From the onset of the story she paints a landscape of despair. Silver Lake is a small town with little going for it and certainly few options for troubled teens. The home Cat has been moved to, a doublewide, offers no comfort and leaves Cat angry with her father and his new girlfriend. Cat’s mother, trying to find a new life, comforts herself with Franzia rose, stockpiled in boxes. Cat’s life is as desolate as Silver Lake, until she meets Marlena.

In Marlena, Buntin delivered a young woman who was an even more serious victim of her parent’s choices. With no mother around and a father cooking meth in a trailer out back, plus a little brother to care for, Marlena had few choices. It’s easy to see how she became a pill-popping, hard-drinking, risk-taking girl. Cat’s fascination with Marlena was complete. Like so many vulnerable young girls, Cat changed to match her new friend.

“Day by day I made sacrifices, though they didn’t feel like sacrifices at the time, redefining myself according to who she was, until we became the perfect team – her impulsive and brave; me calculating and watchful; her dangerous, me trustworthy; her pretty, me sweet; her high, me drunk; and so on, et cetera.”

Buntin’s writing was gorgeous. She was able to capture the bleakness of Silver Lake and the desperation in her characters with hauntingly authentic prose. What I liked most about Marlena, was that that the story was told from the perspective of Cat, twenty years later. Buntin’s portrayal of Cat at both 15 and 35, felt very true to life. Cat, the narrator, delivers the year she spent with Marlena with no excuses, but with compassion both for Marlena and her younger self. She’s harder on the woman she is today, weary of repeating the same mistakes, but afraid to move on. Marlena, ultimately, is the story of a woman still struggling to gain the perspective she needs to forgive her 15-year old self. This is a terrific coming-of-age debut! Grade: A-