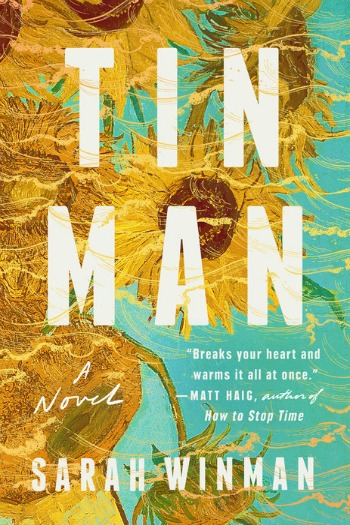 Ellis Judd once had a joyful life with the two people he loved most: his wife, Annie, and best friend, Michael, but now Ellis is completely alone. Tin Man is his story.

“Ellis and Michael are twelve-year-old boys when they first become friends, and for a long time it is just the two of them, cycling the streets of Oxford, teaching themselves how to swim, discovering poetry, and dodging the fists of overbearing fathers. And then one day this closest of friendships grows into something more.

But then we fast-forward a decade or so, to find that Ellis is married to Annie, and Michael is nowhere in sight. Which leads to the question: What happened in the years between?”

Ellis Judd – I found myself immediately drawn to Ellis Judd. There was such sadness around him and I had to discover why. At the story’s onset, Ellis was a creature of habit, following the same routines, day in and day out. His life was completely solitary, yet you knew he once had so much more. At the beginning of Tin Man, Ellis reminded me a little of Ove in A Man Called Ove. That feeling didn’t hold up long, but set the book off on a wonderful path. Even as a boy, Ellis was very endearing. He lost his mom at only 14, and had to continue on with a father who didn’t know how to show Ellis love.

“He rarely went to his father’s house when nobody was there, rarely went when only his father was there, truth be told. He did anything to avoid the wordless connection neither felt comfortable with.”

Ellis Judd was a man whose life had been touched by tragedy too many times, yet in between his joy was nearly complete. In this way Ellis reminded me of Cyril in The Heart’s Invisible Furies.

An Interesting, Beautiful Friendship – Ellis and Michael met when they were both 12-years old. These two had much in common. In different ways, both lost their mothers. One’s father was dead, the other’s remote. They shared a love for Mabel, Michael’s grandmother and protector of both boys. As they grew older, their feelings for each other also grew, leaving them both a little lost. When Annie entered the picture, she was like a balm on their friendship, smoothing out the rough patches, loving them both.

That Writing – Sarah Winman has such a lovely way of wording her story. I highlighted many passages and could have easily highlighted many more. Her words touched me over and over, sometimes bringing tears.

“Mabel’s hand pressed firm to my back, holding me up. It’s got cold, she said. Let’s go home and get you warmed. The gesture almost broke me. We settled silently in the back of a taxi, no talk of the beautiful day or who wore what or who said what. I could see her looking at me. She slipped her hand into mine. Waiting for me to crack. That’s how I knew she knew. Had always known. As if she, too, had seen another version of our future orbiting around us. Before its fall to earth on that real and perfect day.”

Winman wisely divides her novel into two narratives, spectacularly woven together. The first, told in third person, focuses on the boys growing up, and Ellis in the present day. The second part, told in first person by Michael, fills in the gaps that grew larger and larger in the first half. This set up left me nearly rabid to know more. Tin Man is a slim novel that many will devour in a single sitting.

Gentle Start – Some might call the beginning of Tin Man a little slow, but for me gentle is a better word. Ellis is a broken man, and Winman eases the reader into knowing him. For some, this might require a little patience in the early pages.

No Quotation Marks – I hesitate to include this, because it didn’t bother me at all, but I know some it bothers. (Though, honestly, I think we need to let it go! I don’t see this trend going away.)

I adored Tin Man. The characters, the plot, and the writing were all remarkable on so many levels. I already want to read it again! I applaud Sarah Winman on creating such a beautifully crafted story of love. Grade: A

Note: I received a copy of this book from the G.P. Putnam’s Sons in exchange for my honest review.