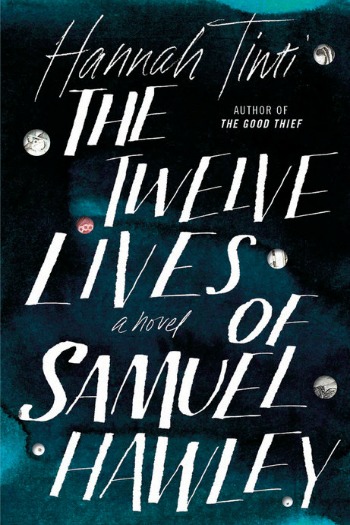 Primary Characters: Samuel Hawley – Samuel has been a lot of things in his life: a desperate teenager, a common thief, a killer, a loving husband, a father, a protector. Loo Hawley – A brilliant girl, teenage Loo finds herself settled for the first time and it’s in the town where her mother grew up. Questions inevitably follow.

Synopsis: For as long as she can remember Loo and her father have led a life on the move. Their homes? Motels. Their stays? Weeks to months. Her schooling? Sporadic. Their traveling companions? Guns, rifles, a licorice jar stuffed with money, and a bear skin rug. As Loo reaches her teens, Samuel wants to give her a more normal life, so settles them both in Olympus, Massachusetts where Loo’s mother grew up. Such a huge life change brings with it questions: questions about her mother, questions about their life on the run, and most of all questions about Samuel, for he is the biggest unknown in Loo’s life.

Review: The Twelve Lives of Samuel Hawley, Hannah Tinti’s new book, is definitely one of my favorites this year. She did a masterful job of combining a coming-of-age story with a dark mystery. The chapters alternated between Samuel’s past and the life Loo and Samuel shared in Olympus. Samuel’s life unfolded through the bullet wounds on his body. Each scar revealed a little more about the man that he was and the life of crime he’d chosen for himself. The other chapters focused more on Loo and her reactions to being the new girl in her mother’s hometown. But, the more Loo learned the more questions she had about Samuel and his dark past.

It’s easy to love a book when you love the characters and I was crazy about both Samuel and Loo in The Twelve Lives of Samuel Hawley. Taking an objective look at Samuel Hawley, there really is far more to dislike than to like. He was a criminal and a killer. The choices he’d made spilled over into the lives of the people he loved most, his wife, Lily, and his daughter, Louise. Somehow, Tinti managed to give this man redeeming qualities so that I couldn’t help but care about Samuel. He was a man in pain who, above all else, loved and wanted to protect his daughter.

“Hawley told her it was her mother’s hometown…..A normal life, Hawley said. With a real house and a neighborhood and friends her own age and a school where she could find a place to belong.”

Loo captivated me even more than Samuel. This was a girl who’d led a life on the run, and the transition to “normal” was not an easy one for Loo. She was different than most kids and making friends was not a skill she’d ever learned. Loo had holes in her life, the biggest being her mother. She’d only known Lily through Samuel and the small shrine he built to her in the bathroom everywhere they had lived. As a teen walking the same streets her mother had, Loo’s appetite for details about Lily could not be quenched, and Samuel couldn’t give her more. When she looked to others for answers, Loo began to see her father with fresh eyes. What she saw slowly eroded their bond.

“Loo watched him shoulder the rifle and understood, in a flickering moment, that her father was exactly that – a professional. All the guns in their house. All the scars on his body. All the ways that he was careful. It was because of this.”

Hannah Tinti’s writing was truly magnificent. She didn’t judge her characters, but treated them with empathy. She gave reasons for Sam’s actions without excusing them. In Loo she created a character that elicited both sympathy and hope. I’m predicting that The Twelve Lives of Samuel Hawley will be high on my list of top books for 2017! Grade: A