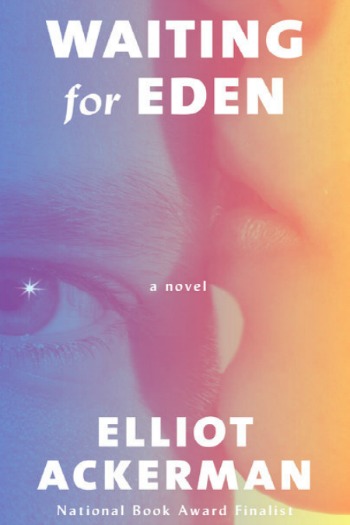 A stunning story of a severely injured soldier and the long wait for death.

“Eden Malcom lies in a bed, unable to move or to speak, imprisoned in his own mind. His wife Mary spends every day on the sofa in his hospital room. He has never even met their young daughter. And he will never again see the friend and fellow soldier who didn’t make it back home….“

The Narrator – A dead man, a dead soldier brilliantly narrates Waiting for Eden. We never know his name, but we learn much about him. He was a friend to both Mary and Eden. He died in Iraq in a blast from a triggered pressure plate that killed everyone nearby. Everyone, but Eden. In the three years since, he’s never left and remains a sort of omnipresent voice piecing together Eden’s life before and after the tragedy. He cares deeply about Eden, but also Mary, and the daughter who was born just months after Eden arrived at the Austin Burn Center. He sees their hearts and feels their pain, as he waits for Eden.

Mary – Mary proves to be a complicated character. For more than three years, she’s turned her life into a hopeless vigil for her husband.

“Mary would never leave him. Soon Eden became like an appendage to her, one she spoke for. Grafts, hydrogel treatments, cleanings, all decided by her. His body became her own, and she anchored to it. Even as she refused to leave, she wanted him to die.”

She’s conflicted in her heart. Mary knows her husband has no chance, but between love and guilt, she’s left helpless and can only fight to keep him alive.

A Completely Original Story – It’s rare that you read a book and are left feeling like you’ve never read anything like it, but that’s exactly how I felt about Waiting for Eden. The author, Elliot Ackerman, himself served five tours of duty in Iraq and Afghanistan and was awarded multiple medals. He knows of what he speaks from a military standpoint, but that’s only a portion of this story. The bigger part is the emotional journey all three characters take, the deep pain felt by each, and the way their stories weave together. I wish I could do justice to his accomplishment, to his sparse, yet beautiful writing. Most simply, I was left awed.

“Okay,” she said, hating him in that broken way we reserve for those we truly love.”

An Author Willing to Take Risks – Parts of Waiting for Eden might make some people uncomfortable, but for me those were exactly what made Ackerman’s story so brilliant.

“I could give you a catalogue of his injuries, but I won’t…So, I’ll tell you this: he used to weigh 220 pounds…But now I don’t know what to call him. The 70 pounds that’s left of him in the bed…”

If you stop my blog often, you’ve probably already noticed that this review doesn’t include a section on what didn’t work for me. I simply couldn’t think of anything. Elliot Ackerman wrote a stunning story that elicited so much: discomfort, compassion, sadness, hope, and relief. Above all, Waiting for Eden made me think about what it means to be alive and the value of human connections. It broke my heart and somehow put it back together again. Grade: A