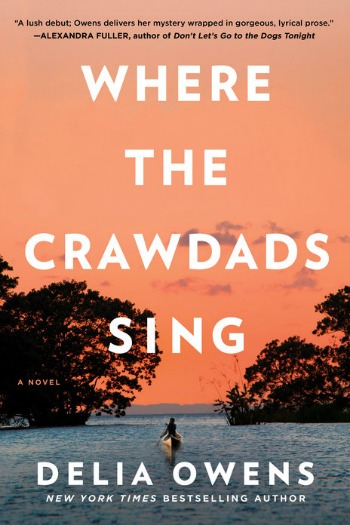 An exquisite story of a girl growing up alone in the marsh and what happens when she lets people into her life.

“For years, rumors of the “Marsh Girl” have haunted Barkley Cove, a quiet town on the North Carolina coast. So in late 1969, when handsome Chase Andrews is found dead, the locals immediately suspect Kya Clark, the so-called Marsh Girl. But Kya is not what they say…”

Gorgeous Writing – Within the first few chapters I’d become a fan of Delia Owens’s writing and by the end I already longed for her next book. To say her writing was poetic feels like a cliché, to say her words brought Kya to life seems all too obvious, to say they sometimes left me breathless appears trite, but Owens’s writing did all this and more.

“Sometimes she heard night-sounds she didn’t know or jumped from lightning too close, but whenever she stumbled, it was the land who caught her. Until at last, at some unclaimed moment, the heart-pain seeped away like water into sand. Still there, but deep. Kya laid her hand upon the breathing, wet earth, and the marsh became her mother.”

The. Marsh. Became. Her. Mother. WOW!

The “Marsh Girl” – Sometimes you like a character and sometimes you don’t, and other times you’re lucky enough to fall a little bit in love with one. I adored Kya. She loved her mother and older siblings, but when Kya was only six, one by one they fled the marsh and her father’s drunken abuses. Within a few more years he too, was gone. Kya proved to be a thoroughly original character, learning to survive largely on her own with only gulls for friends and the marsh for a teacher. Everyone she loved had abandoned her, until she was left alone, crushed by loneliness.

“Before the feather game, loneliness had become a natural appendage to Kya, like an arm. Now it grew roots inside her and pressed against her chest.”

“But just as her collection grew, so did her loneliness. A pain as large as her heart lived in her chest. Nothing eased it. Not the gulls, not a splendid sunset, not the rarest of shells….The lonely became larger than she could hold.”

“Finally, he settled as though he had nested here every single night of his life. He looked at her. Gently she touched his head, then scratched his neck. A loud purr erupted like a current. She closed her eyes at such easy acceptance. A deep pause in a lifetime of longing.”

Most people thought of Kya as “white trash”, and the few who tried to help, she largely feared. Trust came slowly to Kya, but as she aged her loneliness grew unbearable and she fought to overcome her fears and open up her life just a little.

Alternating Timelines – Delia Owens very successfully used alternating timelines in Where the Crawdads Sing. One began in 1969, with the discovery of Chase Andrew’s body, his murder investigation, and the trial that followed. The other told Kya’s story from 1952, when her mother fled, until it eventually merged with the first timeline. In this book it wasn’t the murder investigation that kept me turning pages late into the night. It was Kya’s solitary life and the knowledge that she was eventually going to be charged with this crime. Owens handled the how, when and why of that beautifully, building suspense and doubt along the way.

Science and Poetry – Where the Crawdads Sing had quite a bit of natural world science in it, as well as poetry. For a time, I thought this was a little much, perhaps even pretentious, but as the story neared its end all that came clearly into focus. In the end, I wasn’t really bother by it.

I’m not sure my review does Where the Crawdads Sing justice, so let me be clear: You need to read this book! In a summer of debuts, this one shines among the brightest, giving its readers a coming-of-age story, a mystery, an adventure, and romance all wrapped up in one stunning story. I’m confident you’ll be seeing Where the Crawdads Sing on many top ten lists for 2018! Grade: A

Note: I received a copy of this book from G.P. Putnam’s Sons (via NetGalley) in exchange for my honest review. Thank you!