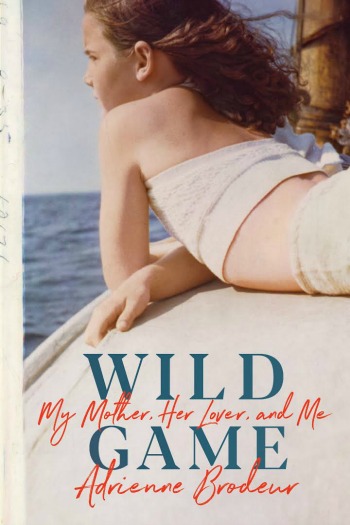 Adrienne Brodeur grew up with a mother that meant everything to her and asked everything of her as the price for her mother’s love.

“On a hot July night on Cape Cod when Adrienne was fourteen, her mother, Malabar, woke her at midnight with five simple words that would set the course of both of their lives for years to come: Ben Souther just kissed me.

Adrienne instantly became her mother’s confidante and helpmate, blossoming in the sudden light of her attention, and from then on, Malabar came to rely on her daughter to help orchestrate what would become an epic affair with her husband’s closest friend…”

I often find it difficult to fairly review a memoir. After all, a persons life is their truth and why do I have a right to have any opinions about it? So let’s delay a little longer and start with the writing. Brodeur is excellent. Her complicated life story unfolds easily and eloquently.

“Malabar was falling in love and she’d picked me as her confidante, a role I hadn’t realized I’d longed for until that moment. Perhaps this would be a good thing.”

I enjoyed Wild Game very much, just not quite as much as I’d expected. Even while completely captivated by Adrienne’s story of growing up as the confidante and accessory to her mother’s long running affair, I couldn’t help being repelled by her mother. Malabar definitely read like fiction. She rapidly moved from one selfish move to another with little concern for those left in her wake. Rennie obviously craved her mother’s love and approval so desperately that for many years she was willing to do anything to help her mother keep her affair under wraps.

“For better or worse, that was who Malabar was to me, the most central and important person in my life, even if I wished it were otherwise. For as long as her love affair had been going on, for me, the “we” had always been my mother and me. Not Ben and Malabar. If Ben was everything to my mother, then what was I?”

No doubt about it, this book is compelling, always keeping me stunned, amazed, and a little sad. Perhaps because it did read like fiction, I became anxious for Rennie to pull away from her mother and find herself much sooner than she did. I wanted her to be free! Brodeur’s journey was no one’s but her own and despite sometimes feeling almost complicit for being on it with her, it’s a memoir I’ll long remember. Grade: B

*** I’d originally planned to listen to Wild Game on audio and now regret that I didn’t. I think this is one of those books that would have worked better for me with Julia Whelan telling the story.