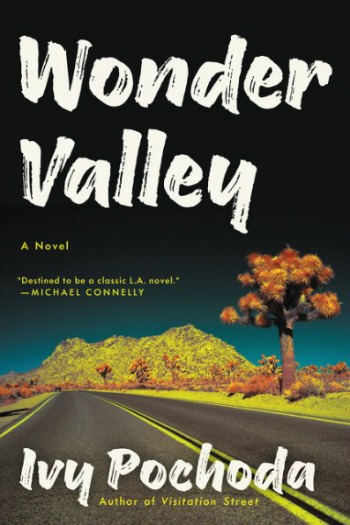 A man runs naked down an LA freeway, putting into play a story of haunted pasts and uncertain futures.

“When a teen runs away from his father’s mysterious commune, he sets in motion a domino effect that will connect six characters desperate for hope and love, set across the sun-bleached canvas of Los Angeles.”

An Assortment of Stories – In the first few chapters of Wonder Valley Ivy Pochoda begins several seemingly unrelated stories. The book opens with one man’s fascination with another who runs naked through early morning commuter traffic. The first abandons his car, chasing after the naked runner. Meanwhile, near Twenty Nine Palms, CA a young woman walks toward a commune she knows nothing about.  She’s running from something, but what? Sam and Blake, small time criminals, big time addicts are in search of an elusive new home in the desert of Wonder Valley. And Ren, fresh out of 8 years in juvie, has come to LA to find his mother and bring her home.

Amazing Characterization – Each of the many characters in Wonder Valley is distinct and thoroughly original. At times I would have questions about a character’s life or motivation, and inevitably Pochoda provided an answer, making for some very satisfying reading.

“At first Britt resisted the desert’s insistent takeover. But when she caught her reflection thrown back at her in the large window of her cabin by the night sky, she felt relief, as if the sand and sun and smells would soon hide her self from herself, building anew person on top of the one she’d been trying to escape.”

Suspense – I’d never classify Wonder Valley as a suspense novel, yet I felt suspense much of the time as I read this book. The real mystery was in how all the different characters’ journeys were going to converge into one cohesive story. A merge was inevitable, but prior to the halfway point it was difficult to connect even a couple pieces together in any meaningful way. I liked the off-balance feeling Pochoda’s storytelling produced.

An Unlikely Pivot – With so many characters, it’s hard to know any that well or to judge their decisions. Still, a pivotal decision by one of the central characters (perhaps even THE central character) seemed so unlikely as to be nearly unbelievable. Without this decision the story would never have unfolded the way it did. I wish Pochoda had better laid the groundwork for a character making a very specific choice when all along she’d convinced me that character longed for something much different.

An Abrupt Ending – While the ending left me satisfied in most ways, it came on very suddenly, leaving me feeling a little stunned.

I thought Wonder Valley was a perfect book for rounding out my fall reading, especially in a slow November. After a series of disappointing books, I was thrilled to find one in which I could be fully invested and eager to get back to. If you like books set in California or appreciate fabulous characterization, Wonder Valley is definitely a book you should try. Grade: B