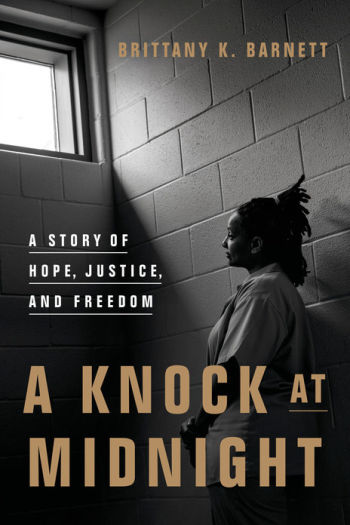 One woman’s remarkable story of how she came to be a powerful force in trying to right the many wrongs caused by the “war on drugs.”

“Brittany K. Barnett was only a law student when she came across the case that would change her life forever—that of Sharanda Jones, single mother, business owner, and, like Brittany, Black daughter of the rural South. A victim of America’s devastating war on drugs, Sharanda had been torn away from her young daughter and was serving a life sentence without parole—for a first-time drug offense. In Sharanda, Brittany saw haunting echoes of her own life, both as the daughter of a formerly incarcerated mother and as the once-girlfriend of an abusive drug dealer. As she studied this case, a system came into focus: one where widespread racial injustice forms the core of America’s addiction to incarceration. Moved by Sharanda’s plight, Brittany set to work to gain her freedom…”

Let me start by saying A Knock at Midnight is one of the best memoirs I’ve read in a long time and definitely a contender for my best books of the year. In it, Brittany K. Barnett shares her amazing life journey and at the same time makes clear exactly how the “War on Drugs” unfairly incarcerated hundreds of thousands of Black, Brown and poor people. Barnett shares her early experiences with drugs seeping into her own community, and how the law sought to punish without much regard to the level of involvement. Her mother spent more than one stint in jail including two years in prison on drug charges. More than anything, the heartbreak of visits to her mom in prison changed the course of Brittany’s life. Slowly she made the shift from a career as a high paid corporate accountant to a young attorney fighting to free people from ridiculously long, wildly unfair drug sentences.

What I loved most about A Knock at Midnight was that Barnett put faces on the cruelty of the “War on Drugs.” Last summer I read books by Ibram X. Kendi, Ta-Neshi Coates, and others that talked about how the “100 to 1” laws started filling prisons with Black and Brown people in the 80”s, devastating entire communities and filling our prison systems to overflowing. In her memoir, Barnett shares the almost unbelievable stories of people she fought to free from the Federal Justice System. Their sentences were shocking, as the laws allowed more and more years to be piled on, often with little to no evidence. I learned so much from A Knock at Midnight, but it also had the “could not put it down” quality of a great novel. I’m so glad I read this memoir and I’m thankful that Brittany K. Barnett is the woman she is, doing the work she does.  Add this one to your list of MUST reads!  Grade: A