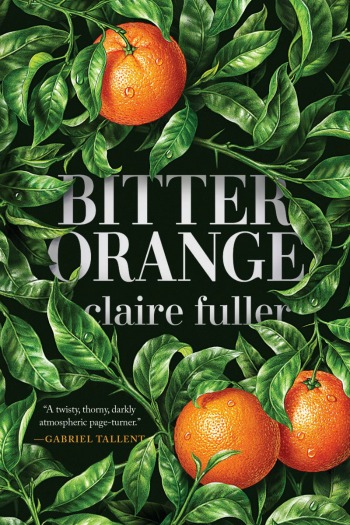 When Frances Jellico meets Cara and Peter at a rundown English estate, she finds friendship for the first time in her life, but that friendship quickly turns into something dark and dangerous.

“From the author of Our Endless Numbered Days and Swimming Lessons, Bitter Orange is a seductive psychological portrait, a keyhole into the dangers of longing and how far a woman might go to escape her past.”

– Our Endless Numbered Days and Swimming Lessons (my reviews)
– Purported to be a twisty, dark tale.
– 1969 English country setting.

Frances – I really liked this odd, friendless character. Frances had a fractured childhood, happy until her father left her mother for another woman…her mother’s sister, and depressing for many years thereafter. At 39, Frances has never had any real friends nor lovers, and finds herself completely alone after her mother dies. She’s a very socially awkward woman, perhaps even on the autism spectrum, but she’s determined to carry on. Frances, a mainly self-taught expert, accepts a position to assess the gardens and the structures in it for an old English estate that has a new American owner. Over the course of one summer, Frances experiences more of life and relationships than she has in her previous 39 years.

“In those evenings at Lyntons I learned about wine. I don’t mean the grapes and the blends, although a little of these stuck too, but how much of it I needed to get a warm buzz in my cheeks, what the right amount was to loosen my joints and allow me to talk, and how many glasses it took for me to believe I was charming and witty.”

Cara – Cara, a free-spirited Irish woman, is also spending her summer on the estate. She’s the partner to Peter who’s assessing the mansion and the architectural pieces contained within. There’s a bit of mystery surrounding Cara, most of it self-created, but its allure is undeniable. Bit by bit, she feeds her story to Frances, who even when shocked, very much wants to believe everything her new friend shares. I liked the dichotomy that was Cara: fragile, but very much in control.

“I knew her already: hot-blooded and prickly, bewitching; a flowering cactus.”

Dual Timelines – I really enjoyed the parts of Bitter Orange that took place in the summer of 1969, when Frances, Cara and Peter met. Unfortunately, the story alternated between then and 20 years later when Frances was remembering back and relating the story to Victor, another player in that long-ago summer. Every time Fuller’s book shifted to 1989, I felt disappointed and was prone to skimming. It too often broke up the much better 1969 storyline.

Too Much Architecture Lingo! – I get that assessing architectural elements was a piece of this story, but it became frustrating. I had to look up too many words, and some weren’t even in my Kindle’s dictionary. In the end, they didn’t matter to the story, but were still an annoyance.

The Ending – I felt like the story veered into unlikely territory several times, and for me the ending really didn’t add up. Two of the three main characters took actions that seemed a real stretch and left me doubting. It was almost as if Fuller wanted to end with a wow factor, but couldn’t quite figure out how to get there. It felt forced.

Unfortunately, Bitter Orange just didn’t deliver all that I’d hoped for. It had some big shoes to fill after Fuller’s debut Our Endless Numbered Days and 2017’s Swimming Lessons. Parts I definitely enjoyed, but as an entire story I was disappointed by just how blah I felt about Fuller’s latest novel. Grade: C

Note: I received a copy of this book from Tin House Books (via NetGalley) in exchange for my honest review.