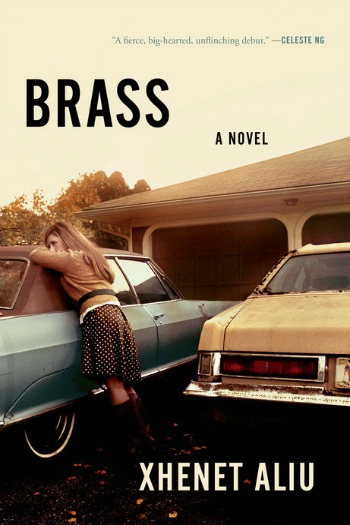 Elsie and Luljeta, mother and daughter, both want more from their lives, but options are limited and their paths woefully narrow.

“A waitress at the Betsy Ross Diner, Elsie hopes her nickel-and-dime tips will add up to a new life. Then she meets Bashkim, who is at once both worldly and naïve, a married man who left Albania to chase his dreams—and wound up working as a line cook in Waterbury, Connecticut…Seventeen years later, headstrong and independent Luljeta receives a rejection letter from NYU and her first-ever suspension from school on the same day. Instead of striking out on her own in Manhattan, she’s stuck in Connecticut with her mother, Elsie—a fate she refuses to accept.”

Dual Structure – Brass is really two stories that intertwine. Sometimes that works, but other times it can be a hot mess. Xhenet Aliu masterfully made it work in her debut novel. Hers is actually two different coming-of-age stories, that of a mother (Elsie) grappling with her life after high school and her daughter (Luljeta) in a very similar position seventeen years later. Chapters alternate between the two as each struggles with the disconnect between dreams and reality. Their stories are their own, but the influences on them, remarkably similar.

Strong Writing – There is so much to like about Aliu’s writing in Brass, starting with how she handled her two characters. Chapters alternated between the two with Elsie’s told in first person and Lulu’s in the rarely used second person. Choosing different points of view kept each story fresh and its own. Elise especially had a wonderful tongue-in-cheek delivery, never taking herself or her disappointments too seriously. It may sound odd to praise a writer for knowing her characters, but Aliu really knew these women, making each heartbreakingly real. My highlights were copious.

“Why is she crying, why is she the one saying she’s sorry, when you’re the one who fucked up her life…? But even if you don’t understand it, you’re grateful that she’s able to say it, because it feels good to hear. It makes you think that maybe you don’t understand much of anything at all, which feels awful and a little hopeful at the same time.”

Parallel Lives – Elsie and Lulu each have their own stories, and yet their lives each unfold along parallel lines. Disappointment lies at the heart of both their lives: Lulu in her mother’s solitude, her own awkwardness, and in the father missing from her life; Elsie’s in her own mother, the man she chose to love, and the struggle to survive. Disappointment triggers rage in each young woman as they fight against the unfairness life can hold. And finally, Bashkim, boyfriend, father, absent, each woman longs for him knowing that doing so is a poor choice. He finds just the right spot in both Elsie’s and Lulu’s young hearts.

Nothing – Almost everything about Brass worked well for me. I could nitpick and find a minor flaw or two, but honestly that’s exactly what it would be.

I like coming-of-age stories and Brass was the genre at its best. It was a treat to know both Elsie and Lulu as they struggled to move into adulthood. I especially liked that Lulu’s journey also included Elsie as a mother and protector. In Elsie, the story came full circle; in Lulu, we know her start, and can only hope for her future. Theirs is a touching story, beautifully written. I highly recommend Brass. Grade: A